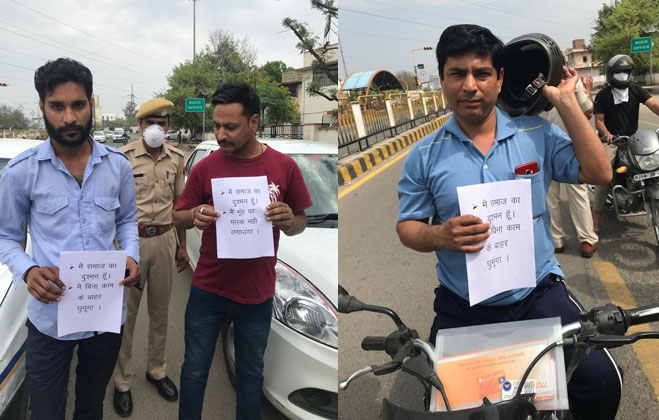 People who were founding violating Lockdown guidelines were given posters by police.

Jaipur: Rajasthan police on Monday started a one-of-its-kind drive to ‘punish’ people who violated the state government’s lockdown guidelines. The people who were found roaming on roads for no reason were given posters saying, “I am the enemy of the society. I will venture out for no reason”.

Many people were handed out these posters in Jaipur, Jodhpur, Kota and several other districts.

“People should stay home. This is the idea behind the lockdown, but we caught many people who were roaming around without any reason any logical reason. We can’t take any legal action because the lockdown doesn’t put any restrictions on the people’s movement. So we decided to make these people aware of their responsibilities as a citizen by giving them these posters,” said a police officer in Rawatbhata.

A WhatsApp message claiming that the grocery shops will be open only a specific period of time during the way went viral on social media; however, administration officials said that no such restriction has been imposed on essential services, grocery and medical shops.

Nearly 30 people have been arrested in Rajasthan for spreading rumours. Police officials said that those who spread rumours or violate section 144 of CrPC that bans gathering of five or more people will be arrested.