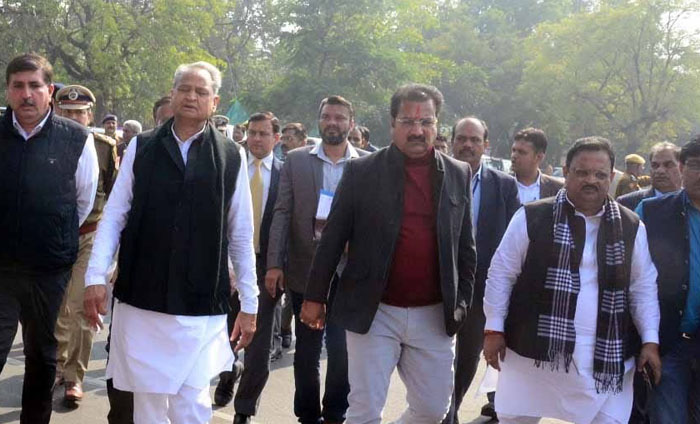 Jaipur: Rajasthan chief minister Ashok Gehlot on Sunday announced that his government wouldn’t implement Citizenship Amendment Act (CAA) and NRC in Rajasthan. Gehlot was addressing a gathering at Gandhi Circle after leading a Peace March against CAA and NRC. He lashed out at the Narendra Modi government accusing it of being insensitive.

“You can form the government with a majority, but it doesn’t necessarily mean that you can win hearts of the people. At least 15 people have been killed in Uttar Pradesh alone. Violence is being reported in BJP-ruled states. NRC failed in Assam, leading to exodus of 15 lakh Hindus from the state. The CAA is also not practical,” said Gehlot.

He said the country is being ruled by RSS. The PM is working at the whims of the organisation.

“Why shouldn’t RSS declare itself a political organization. Let them jump into the politics,” said Gehlot.

Deputy chief minister Sachin Pilot also addressed the gathering. He said that people have hit road to protest against the CAA.

“You can enact a law with a majority, but you have no right to distort the core values of our constitution. There had been amendments in the citizenship act in the past also. What is the reason that people are protesting this time,” said Pilot.

He said that the Congress will take out another march from Shaheed Smarak to PCC on December 28.

Gehlot led a peace March from Albert Hall to Gandhi Cirlce on Sunday. Thousands of people and senior Congress leaders participated in the march.

The government shut down mobile internet services. The Jaipur Metro trains didn’t run for security reasons. Heavy police force was deployed in the city to maintain law and order.