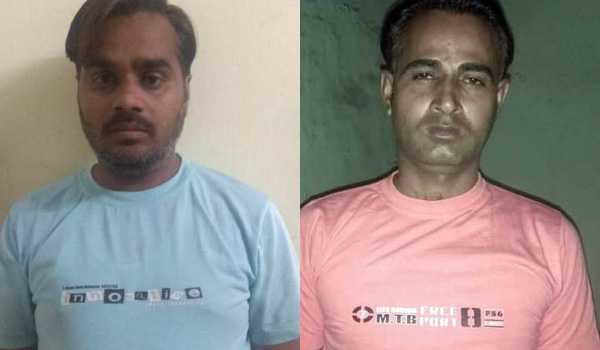 Two men who were arrested for preparing fake Indian army IDs and documents.

Jaipur: Rajasthan ATS in a joint operation with the local district police busted a gang involved in preparing bogus ID documents of Indian army and the union government and arrested two men on Thursday. The arrests were made from Hinduan area of Karauli district.

ADG, ATS Anil Paliwal said that they received complaints against the gang active in Karauli district. The gang was involved in preparing bogus documents of the Indian army and government. They also prepared bogus Aadhar cards, Bhamashah cards and marksheets of various universities and boards.

“An ATS team camped in Kaurali district, particularly in Hindaun and nearby areas for nearly one and a half months and stated collecting information about this gang. When it was confirmed that the gang was in fact involved in these illegal activities, we sought the help of the local police in arresting the accused,” said an officer.

The officer added that two men who were arrested are Jinesh Jain (38) and Sahiram Singh (34), both residents of Kaurali district.

Many bogus ID cards, documents and equipment used for preparing them were recovered.

An FIR against the duo has been registered with Hindaun police station.

“We are trying to identify and arrest other members of this gang. The two men would be interrogated,” said the officer.