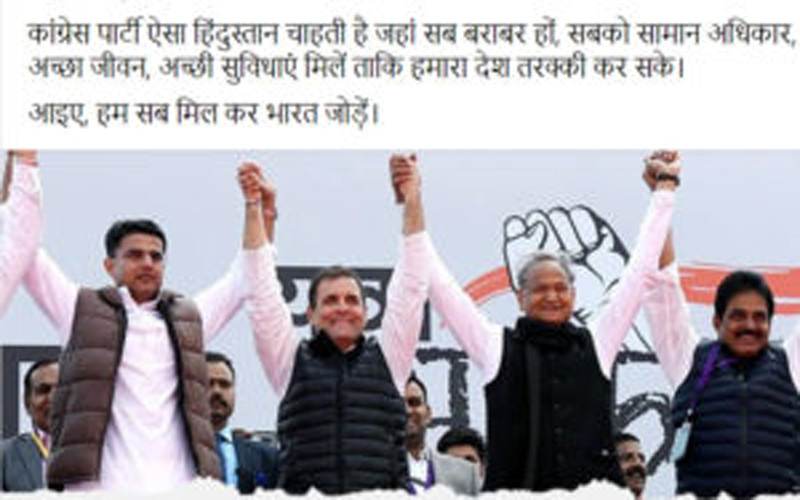 Jaipur: While Rajasthan chief minister Ashok Gehlot and senior Congress leader Sachin Pilot don’t shy away from taking indirect jabs at each other from time to time, former Congress national president Rahul Gandhi is painting a united face of the party in Rajasthan. In the latest Facebook post that has triggered political speculations, Gandhi posted a photo of himself with both Gehlot and Pilot.

In the Facebook post, he praised the work of the Gehlot government, particularly in the field of medicine. Political experts said that there was no need for him to pick a photo that also includes Pilot but he seems to be giving a massage ahead of the upcoming elections that the party is united in Rajasthan.

In the photo, Gandhi is seen holding raised hands of Gehlot and Pilot. Experts also say that Gandhi might have also aimed to give the party workers in the state the message that he gives equal importance to Pilot.

Pilot was somewhat sidelined after the differences between him and Gehlot became public, but Rahul Gandhi had praised Sachin Pilot's patience among Congress workers at the AICC headquarters in Delhi on the last day of his interrogation by the ED recently.

Rahul Gandhi posted, “the Congress government of Rajasthan has fulfilled another promise made to the public. As many as 824 more medicines have been included in the free medicine scheme in the state. Rajasthan became the first state in the country where about 1795 medicines are available absolutely free of cost. Many of these costly lifesaving medicines will also be available free of cost, which will save millions of lives.”

“The Congress government is committed to providing better health facilities to the people of Rajasthan. Our goal is to make people's lives better. Our priority is to reduce the gap between rich and poor by providing good treatment, tests, and medicines free of cost in all hospitals. Congress party wants such an India where everyone is equal, everyone gets equal rights, good life, good facilities, so that our country can progress,” he further said.

As the praise was for the government, many couldn’t understand why the social media post accompanied a photo with Pilot in the frame.