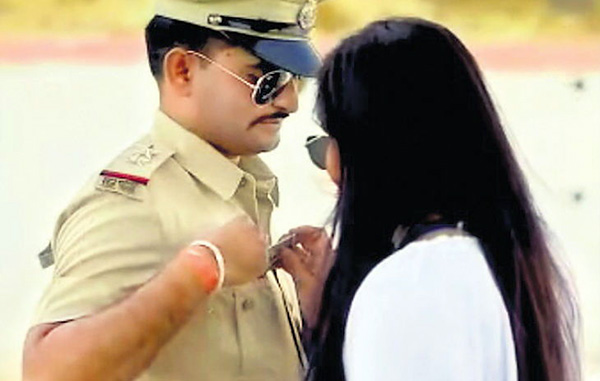 Jaipur: SHO of Kotra police station in Udaipur Dhanpat Singh who courted controversy after his pre-wedding shoot went viral will likely face departmental action. In the pre-wedding shoot, the SHO is shown taking Rs 500 bribe from his fiancé. The fiancé puts Rs 500 currency note in the SHO’s pocket when he catches her flouting traffic norm. The SHO was in the uniform.

SP, Udaipur Kailash Chandra Bishnoi said that a department action has been initiated against the SHO. The pre-wedding shoot was posted on YouTube, but it was later removed.

A sub-inspector had complained against SHO Dhanpat Singh who is also an SI following which IG (law and order) Hawa Singh Ghumaria took cognizance and said that the video maligns the image of the police department. The IG said that the SHO was in uniform.

IG also wrote to all the range IGs in the state and asked them to put a check on such shoots and take action against police officials who malign the image of the department.

The video shows the fiancé riding a two wheeler without wearing a helmet. The SHO catches him. She puts Rs 500 note in his pocket. She than moves behind the police officer and steals his purse.