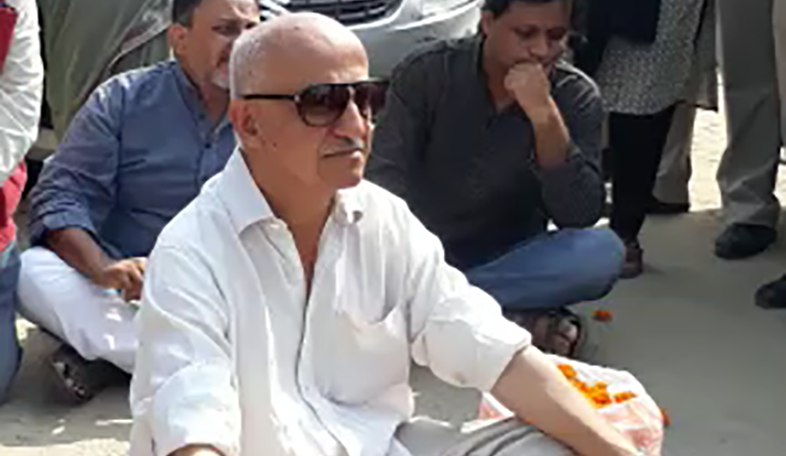 Jaipur: A day after Rajasthan gave clean chit to six men who carried cash reward on their heads for murdering Pehlu Khan after accusing him of cow smuggling, a protest rally organized by former IAS officer Harsh Mandar and some NGOs kept the cops on toes. The rally was taken out in Behror area of Alwar district where Pehlu Khan was beaten to death allegedly by a mob of cow-vigilantes.

The rally was named “Kanrwa-E-Mohammed”.

As some Hindu organizations protested against the rally, heavy police force was deployed to avoid any confrontation between the two sides and maintain law and order.

The police didn’t allow Harsh Mandar to reach the spot where the lynching took place. The former IAS officer set on a dharna along with his friends at Jaguwas Chowk in Behror. Both sides got into a verbal spat. Failing to reach the spot, Harsh Mandar left Behror and reached Jaipur. Harsh Mandar alleged that there is an atmosphere of insecurity among minority community.

Pehlu Khan was lynched by a mob of cow vigilantes in Alwar’s Behror area on April 1. His family members registered an FIR naming many people. It was alleged that Pehlu Khan didn’t have permission from authorities to transport animals. The vigilantes intercepted his vehicle and beat him and nearly 15 other people severely. He died while undergoing treatment. Other injured men were admitted to a hospital in Behror.

Alwar police announced a cash reward of Rs 5000 each on six absconding men including Om Yadav, Hukum Chand Yadav, Sudhir Yadav, Jagmal Yadav, Naveen Saini and Rahul Sharma. The police had arrested five of these people. They were given a clean chit on Thursday.

Police officials said that the mobile call location of these people showed their presence somewhere else at the time of the incident. The police also recorded statements of some employees of a cow shelter. On the basis of these statements, the police concluded that the five men were not at the spot.