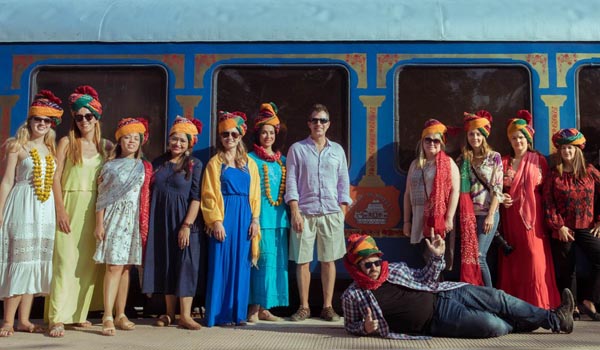 Jaipur: The Palace on Wheels (PoW) operated by the Rajasthan Tourism Development Corporation (RTDC) reached Gandhi Nagar railway station in Jaipur with 58 tourists onboard on Thursday morning. The tourists onboard the royal train received a grand welcome at the station in the traditional Rajasthani style. PoW is among the top ten luxurious tourist trains of the world.

The tourists received traditional welcome with flowers and tilak on their forehead. They were entertained with shehnai vadan, traditional kacchi godhi dance and Kalbelia dance.

The tourists were filled with a lot of excitement after receiving a warm welcome in the city. They danced with the artists and took selfies and pictures.

The Palace on wheels will leave for Sawaimadhopur from Jaipur on January 10. The passengers of the train will visit various tourist destinations in Jaipur on Thursday.

“The way people of Rajasthan welcome tourists is amazing. I would like to come to the state again and again. The culture and traditions are awesome,” said a tourist at Gandhi Nagar railway station.

According to General Manager of PoW Pradeep Bohra, the train has received 20% more booking this time, as compared to the last time. Several changes for the convenience of commuters have been introduced. It will take tourists to several places on the Golden Triangle including Jaipur, Sawai Madhopur, Chittorgarh, Udaipur, Jaisalmer, Jodhpur, Bharatpur and Agra over the next week. The tour started from Delhi and will end in Delhi.
RTDC has been operating the luxury train for the last 36 years.