The man had been lured into smuggling fake currency by the Pak spy agency ISI. 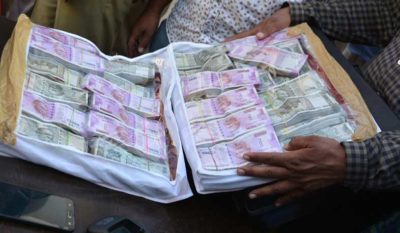 Jaipur: A man identified as Ran Singh was arrested after he was caught with 47 fake currency notes of Rs 2,000 domination each at Munabao Railway Station in Barmer district on Sunday. The man had entered Rajasthan from Pakistan. During preliminary investigation, it has come up that he had been lured into smuggling fake currency by the Pak spy agency ISI. The security agencies have launched an investigation.

The man is a resident of Pakistan’s Mithi area. He had come to Munabao Railway Station via Thar Express. He had hid the fake currency notes in his luggage; however, he was caught at the security check counter. He was taken into custody.

“The man belongs to Pakistan and travelled in Thar Express. We found 47 fake currency notes following which he was detained and interrogated,” said an officer.

Sources said that the man was in touch with ISI and had been asked to smuggling the currency notes into the Indian territory.

Nine Unmanned Aerial Vehicles (UAVs) were sent into Indian territory by Pakistan in a span of 13 days, but they were all shot down by the Indian security forces.