‘Padmaavat’ not to be screened in Rajasthan multiplexes

Home » City Reports » ‘Padmaavat’ not to be screened in Rajasthan multiplexes

Jaipur: The multiplex owners have decided not to release Padmaavat in Rajasthan on January 25 in view of the prevailing law and order situation. In a press release, the Multiplex Association of India said that its members in Rajasthan won’t screen the movie on December 25.

“All the members of the Multiplex Association of India have taken a decision not to screen the film Padmaavat directed by Sanjay Leela Bhansali at any of their multiplexes in Rajasthan in view of the prevailing law and order situation and the potential risk to property and life as a result of such screening,” said president Deepak Asher.

He added, “The safety of our patrons and visitors to the malls and multiplexes is of paramount importance and since it was apprehended under the present circumstances that there could be potential risk to their safety, all the members of the association have individually considered it prudent to not screen the movie at present. Our members are keeping a close watch on the ground situation and will review the decision if so warranted in the best interest of their patrons,” said Asher. 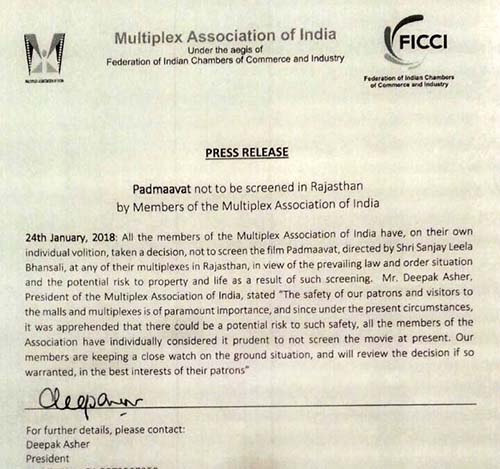 Multiplex owners decide not to release Padmaavat in Rajasthan on January 25.

The decision has come as a major setback to the producers even when they obtained a Supreme Court order lifting the state government-imposed ban on the movie. The Rajasthan government had moved the apex court requesting it to review its order, but the court turned down the request.

Shri Rajput Karni Sena has called for a nationwide bandh on January 25 when the movie is slated for release in theaters across the country. Its leader Lokendra Singh Kalvi who is spearheading the protest against Padmaavat held a press briefing in Jaipur on Wednesday and claimed that the movie won’t be released in at least six states of the country including Rajasthan, Gujarat, Haryana, Uttar Pradesh and Bihar. Kalvi said that Rajasthan might put him behind bars. Kalvi claimed that nearly 150 members of the organizations have already been taken into custody by police in different states including Maharashtra and Gujrat.

Karni Sena also warned schools not to play ‘Ghoomar’ song of the movie on Republic Day.

Some leaders of the organizations were taken into preventive custody in Chittorgarh on Wednesday.

Some women belonging to Rajput community tried to enter the Chittogarh fort and in view of the Karni Sena warning that Jauhar – that was the Hindu custom of mass self-immolation by women – would be performed, the police cordoned off the area. It is believed that Rani Padmini had performed Jauhar along with 16000 woman in this fort.

Sporadic incidents of violence were also reported. Karni Sena supporters blocked the Delhi-Mumbai highway near Jaipur and some other places. They also brunt tyres and staged demonstrations.