‘No guarantee budget promises will be fulfilled’: slip-of-tongue lands Raje in soup

The chief minister was, however, quick to add that the government would leave no stone unturned to complete all the projects and fulfil announcements made in the budget. 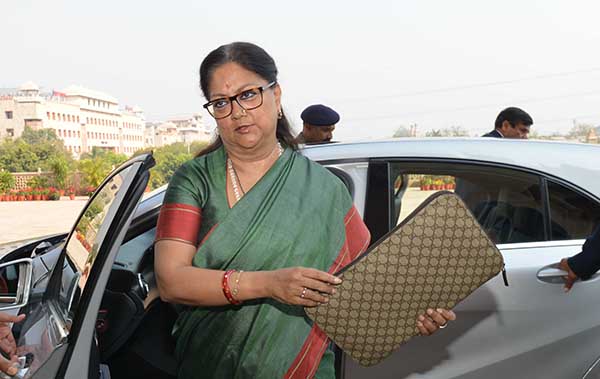 Jaipur: Rajasthan chief minister Vasundhara Raje’s response to a journalist’s simple question has created a social media storm. When asked if she could guarantee that the announcements made in the Rajasthan Budget 2017-18 would be fulfilled, she apparently didn’t give much thought to her answer and said, “there is no guarantee”. The video has now gone viral with the Congress supporters taking a dig at the chief minister for ‘speaking the truth’.

The chief minister was, however, quick to add that the government would leave no stone unturned to complete all the projects according to the announcements made in the budget.

Many said that it was a populist budget to please the masses before the assembly elections, due by the end of this year.

The model code of conduct will come into force after nearly six months, so the government now faces the challenge of keeping the promises made in the budget. The Congress wouldn’t miss the opportunity to turn any failure at the BJP-led government’s part into a poll plank.

The announcement to waive the farmer loan was the most discussed topic on social media.

Real estate sector particularly welcomed the budget as the DCL rates have been slashed by 10% with immediate effect.

Subscribe to WhatsApp updates for Jaipur News Click on the following link(s) to find the latest & related stories on: Rajasthan Budget 2018-19
RELATED

Rajasthan Budget 2018 for real estate: All you need to know

Rajasthan Budget 2018: here is what government employees got