Thousands of people reached the village to pay tribute to the braveheart on Monday. His body was taken to the cremation ground via road in which a huge crowd was present. 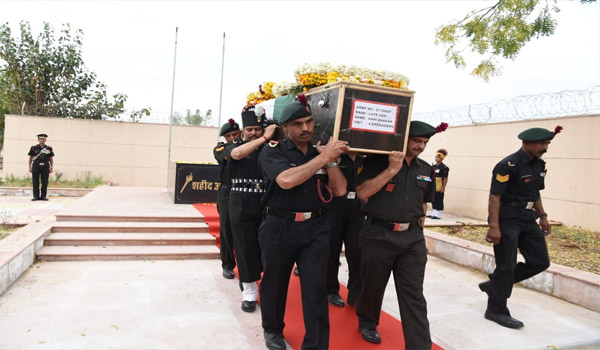 Jaipur: The last rites of 21-year-old martyr Grenadier Hari Bhakar who was killed in a ceasefire violation along the LoC in Jammu and Kashmir by Pakistani troops were performed at his native village Joosari near Makarana in Nagaur district of Rajasthan on Monday.

Thousands of people reached the village to pay tribute to the braveheart on Monday. His body was taken to the cremation ground. A huge crowd was present.

The body of martyr grenadier Hari Bhakar reached Jaipur Airport on Sunday and reached his native village around 10 pm.

According to the relatives, Hari Bhakar joined the Indian Army on July 1, 2016. He visited his home to attend his sister’s wedding in February.

As many as 15 members from his family are serving in the army including his twin brother Harendra. Hari’s sister married an IAF soldier last month.

Hari Bhakar’s father Padmaram who is a member of village Panchayat and farmer by profession said that it would be difficult for the family to live with this loss. But he is proud that his son sacrificed his life to protect the borders.

The family members and villagers mourned the death of Hari Bhakar as he lost his life at such a young age.

As per army officials, Hari Bhakar was critically injured in the cross-border firing on Saturday evening and was immediately taken to the nearest hospital. He succumbed to his injuries early morning on Sunday.

Pakistani forces opened fire on the Shahpur and Kerni areas in Jammu and Kashmir’s Poonch district around 5.30 pm on Saturday and it continued intermittently through the night. Heavy caliber weapons and rockets were used and fired at Indian army, officials said.

An official statement issued by the Ministry of Defence confirmed heavy casualties and damage on Pakistan side in strong and effective retaliation by the Indian troops in both Poonch and Rajouri sectors on Sunday.