MLAs who backed Ashok Gehlot return to Jaipur from Jaisalmer 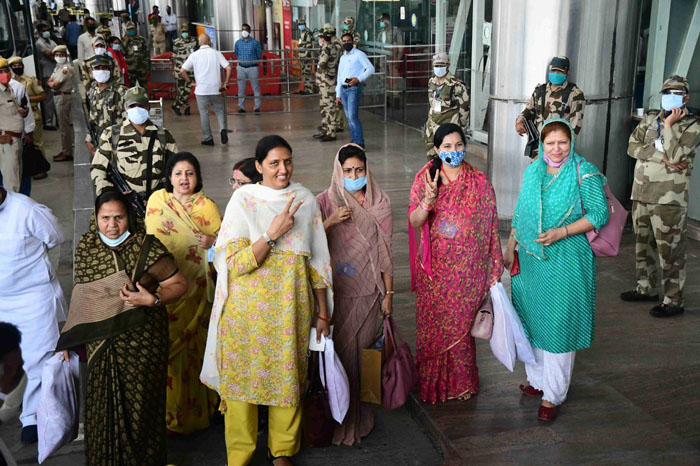 Woman Congress MLAs and leaders at Jaipur airport after returning from Jaisalmer.

Jaipur: The legislators of chief minister Ashok Gehlot’s camp returned to Jaipur from Jaisalmer on Wednesday; however, it may still be a while before they are allowed to return home. They were taken straight to a five-star hotel on the outskirts of Jaipur after their special charter flights landed at the airport. It is believed that they will continue to stay in the hotel until the assembly session which is to begin on August 14 ends.

The MLAs of Ashok Gehlot camp were lodged in the same hotel on July 13. They were then taken to a hotel in Jaisalmer. A video supposedly showing MLAs in the bus after it left Jaipur airport has surfaced. In the video, the MLAs look relaxed. Congress leader Mahesh Joshi in fact sang songs. Other MLA also joined in.

At least 90 MLAs and 20 Congress leaders were being kept in Jaisalmer since July 31. Chief minister Ashok Gehlot visited them on Tuesday and discussed the political situation in the wake of sacked deputy chief minister Sachin Pilot’s return to the party.

The assembly session will begin on Friday. Chief minister Ashok Gehlot said that it’s obvious the MLAs faced hardships as they were staying in a hotel, but their role in ‘saving’ the democracy and its values is highly appreciable.

“Our friends who had gone away have come back. I sincerely hope that we will sort out our differences and stay true to our commitment of serving the people of the state,” said Gehlot.