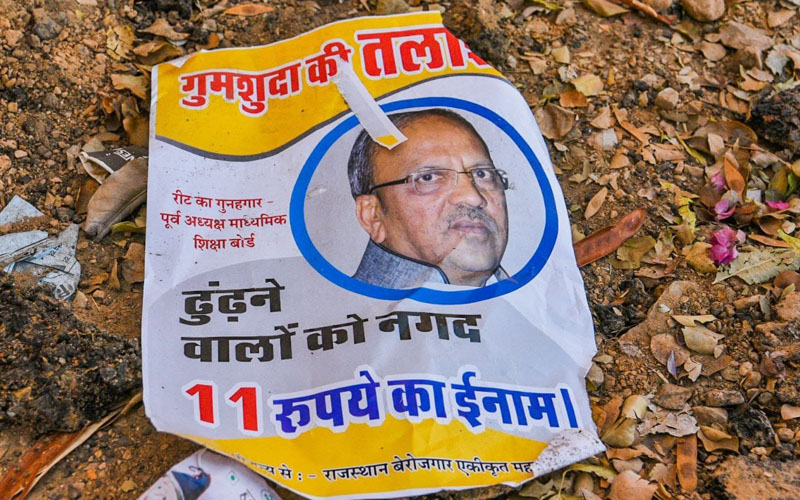 Jaipur: The controversy surrounding the REET paper leak case is far from over in the state. The disgruntled students are trying new ways to vent their anger every day. Unknown people pasted posters of DP Jaroli, former chairman of the Board of Secondary Education (RBSE) in Shiksha Shankul. The paster announced a reward of Rs 11 to anyone who reveals the whereabouts of Jaroli who has not been seen in public after he was suspended.

Earlier, Rajasthan Congress Committee president Govind Dotasara and higher education department minister Subhash Garg were targeted. Graffiti were drawn and posters were put up outside their homes in the Civil Lines area.

The posters credit Rajasthan Ekikrit Berojgar Mahasangh as the organization announcing the reward; however, the office bearers of this organization including Upen Yadav claim that they didn’t put up any such posters.

DP Jaroli disappeared soon after the SOG investigation started. The organizations allege that he played role in the matter, so it’s important to quiz him.

The post was vacant after DP Jaroli was suspended on January 29 over the REET paper leak case.

According to the rules, RBSE is headed by a chairman, but in the event of his or her resignation or end of the term, an administrator can be appointed.