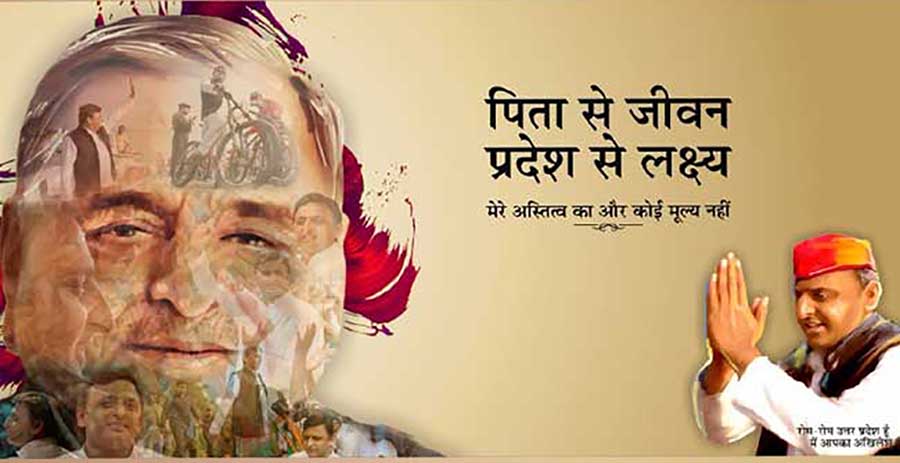 New Delhi: You must already be aware of the big drama surrounding father Mulayam Singh Yadav and son Akhilesh Yadav in Uttar Pradesh, if you keep a tab on politics in this country.  Just like any popular soap opera, the drama is getting bigger and more interesting with each passing day, and the audience is definitely hooked.

Just when people thought the Election Commission had finally drawn the curtains on the show by handing out a verdict in favour of Akhilesh, the son fired another salvo. He is now so humbled by his victory that he is going out of his way to reboot his relationship with Mulayam Singh.

His latest social media campaign is a testimony to this.

Show the slide of images on his Facebook wall to anyone not aware of the big fight in Uttar Pradesh, he or she would think Akhilesh is an incarceration of Shravan Kumar, a historical character from Ramayana. Many voters in Uttar Pradesh will be impressed with Akhlesh Kumar’s change of heart towards his father. And why not! Everybody expected Akhilesh to be smugger after the Election Commission awarded him the rights to use the party name and symbol, but no! he chose to bow down and make up to his father.

However, it won’t be very difficult to understand the true motive behind Akhilesh’s change of heart. Mulayam Singh Yadav has an army of supporters, particularly the elder population in Uttar Pradesh. Akhilesh wants to win some brownie points with them by showing that he is still a respectful son and will never forget his father’s contribution to his career and their party.