A match made in heaven: 3-foot tall Mahmood finally finds his better half in Jaipur

Home » City Reports » A match made in heaven: 3-foot tall Mahmood finally finds his better half in Jaipur 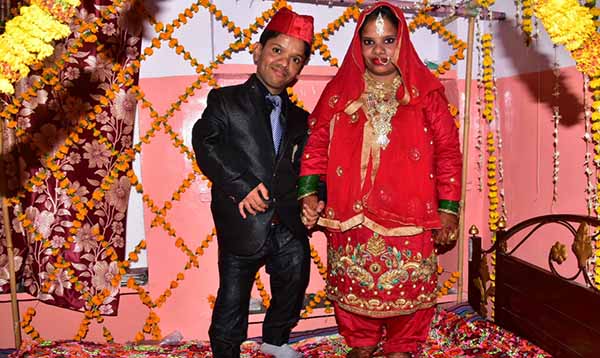 Jaipur: The wedding of Mahmood and Munni in Jaipur’s Ghat Gate area was the talk of the town on Sunday. Both are 3-feet tall and when the couple tied the knot, a crowd of curious people that had gathered outside Mahmood’s house cheered. They blessed the couple and wished them a happy married life.

Mohammed Kuddus and his wife Nazma Bano had always been worried about the height of their son Mahmood. Their biggest cause of concern was where they would find a bride for him. Mahmood had recently turned 29.

One Mohammed Nazim who had once been a neighbor to the family finally found the perfect match for Mahmood. The family members of twenty eight-year-old Munni – a native of Manbagh near Ramgarh Road in Jaipur who is also about three feet tall – were facing the same problem. 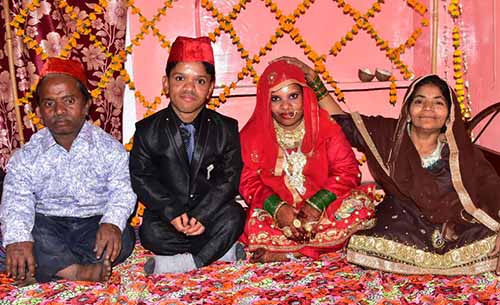 “Munni’s parents readily agreed to the marriage proposal following which an engagement ceremony was held last month. The wedding was solemnized on Saturday. More than 1500 people participated as guests in the wedding. We are so thankful,” Mohammed Kuddus said.

He added that even those who didn’t know the family participated in the wedding function.

Rajesh Kamana, a neighbor told The PinkCity Post that the wedding of Mahmood and Munni was a bigger topic of discussion in Ghat Gate than that of Virat Kohli and Anushka Sharma.