Lok Sabha elections 2019 : Only 2 new faces for Rajasthan in the first BJP list of 16 candidates

The party repeated 14 sitting MP’s and included four union ministers in the first list. Other names will be announced soon, said party officials. 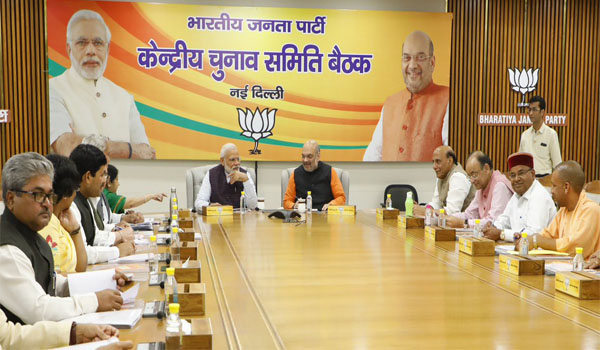 Jaipur:  The Bhartiya Janata Party (BJP) released its first list of candidates for upcoming Lok Sabha elections 2019 on Thursday and finalized the names for 16 candidates from Rajasthan. There are 25 Lok Sabha constituencies in the state. The party repeated 14 sitting MP’s and included four union ministers in the first list. Other names will be announced soon, said party officials.

The BJP has played safe and repeated most of the sitting parliamentarians and union ministers from their incumbent seats as in 2014.

The party has fielded two new candidates for Jhunjhunu and Ajmer seats including Narendra Khinchal who is an MLA from Mandawa assembly constituency in Jhunjhunu region and Bhagirath Chaudhary who is a former MLA from Kishangarh.

The only woman MP on Jhunjhunu seat, Santosh Ahlawat has been replaced with Narendra Khinchal.

Apart from these two, all the representatives are fielded likewise in the 2014 elections.

Relatives and supporters reached Dushyant Singh’s house to congratulate him for making it to the list from Jhalawar -Baran seat. He is the son of former chief minister Vasundhara Raje.

Four Union ministers including Arjun Ram Meghwal from Bikaner, Rajyavardhan Singh Rathore from Jaipur rural, P P Chaudhary from Pali and Gajendra Singh Shekhawat from Jodhpur have made it to this list.

A press conference was held in New Delhi regarding the first list of candidates as the party announced 184 candidates nationwide. Several BJP leaders including PM Narendra Modi, Minister of Home Affairs Rajnath Singh, Finance Minister Arun Jaitley, External affairs minister Sushma Swaraj along with other officials were present in the meeting.

Nominated candidates from Rajasthan in the first list of BJP: