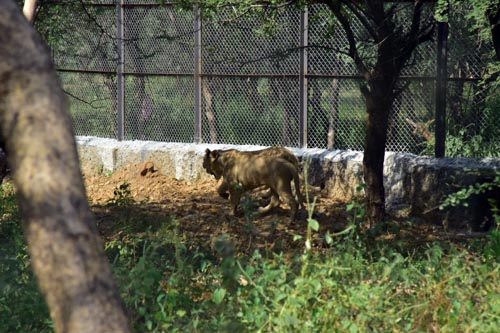 Jaipur: Lion Safari at Nahargarh Biological Park has been shut amid reports that the wild animals are infected with Canine Dispenser Virus. Three big cats – two tigers and a lion – died over one week and the virus is being suspected behind the deaths. The park authorities have decided to close the safari temporarily to provide treatment to the wild animals. The opening of Exotic Park has also been postponed so the visitors will have to wait longer to enjoy sighting of hippo that was brought to the park recently.

The safari was closed on September 22 but since most tourists are not aware of this, they come to the park and return disappointed.

It is for the third time in the past one year that the Lion Safari has been closed for tourists. The safari was launched in October, 2018. The visitors are taken on a tour of area spread over 36 hectares. Two tracks has been built for safari for the sighting of three lions. Earlier the safari was shut down in August due to heavy rains.

On Thursday morning, Sita – the only white tigress of the park – died. Sita was 14-year-old and had been brought to Jaipur from Delhi zoo in 2013. Earlier, lioness – known as Sujain – and the cub of tigress Rambha died under mysterious circumstances. The blood samples have been sent to IVRI in Bareilly for an examination, but the experts don’t rule out the possibility that the wild animals are infected with Canine Dispenser Virus.

The visitors are disappointed when they reach Nahargarh Biological Park to go on a lion safari and are told that it has been closed.

“I came to Jaipur from Delhi for Lion Safari, but I came to know that it has been closed. I was not aware of that. I wasted a lot of money and time,” said Vinod Shagra who visited the park on Sunday.