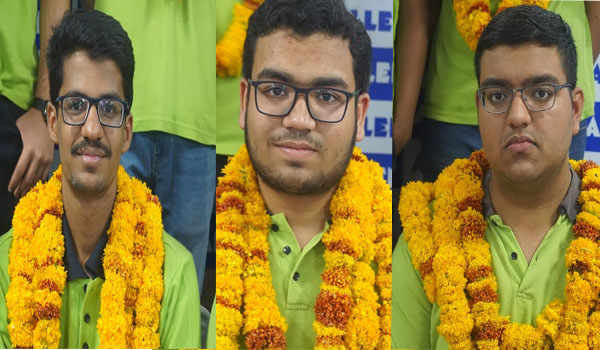 Jaipur: The National Testing Agency (NTA) announced the final results of JEE Main exams late night on Monday. NTA released the national and state topper’s list along with the cut-off percentage on the website. Three students from Jaipur made it to the list of Top-100 students in Rajasthan.

A total of 2.45 lakh students after qualifying the JEE main exam have been announced eligible for appearing in JEE Advanced 2019 exams.

As per the officials, the server was not responding for some time at night due to the heavy traffic on the website.

Three students from Jaipur including Aditya Sharma with 47th rank, Gaurav Kishan Gupta with 64th rank and Akshat Sharma with 54th rank made it into the list of Rajasthan toppers.

A Kota student Nishant Abhangi have topped the Rajasthan’s topper list with AIR- 6. He missed the first national rank with few decimal points. Shubham Srivastava of Delhi secured the first position in the country.

The results were supposed to be out on May 1 but the NTA released it a night before on Monday.

Overall, 24 students scored a 100 percentile, with four students each from Telangana and Rajasthan achieving the perfect score, the highest among the states.

The JEE Main is used as an entrance examination for admission to the undergraduate engineering courses at National Institutes of Technology, Indian Institutes for Information Technology and other institutions run by some state governments.

The JEE Advanced 2019 is the admission test for the Indian Institutes of Technology.