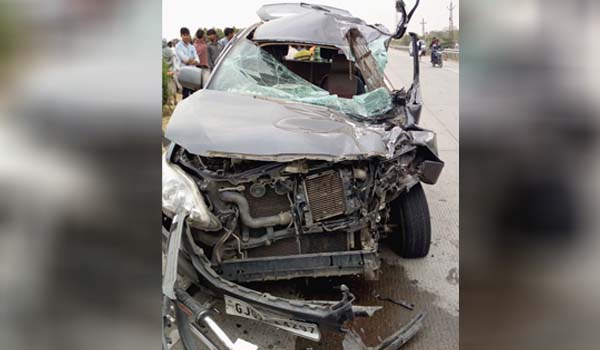 The car in which Jasoda Ben was travelling. The accident occurred some 60 km from Chittorgarh town in Rajasthan today

Jaipur: A day after Jashoda Ben, the estranged wife of Prime Minister Narendra Modi and two other women were injured, while one man died in accident near Chittogarh in Rajasthan, the police arrested the truck driver and booked him for rash and negligent driving. Jashodaben had a narrow escape, however, she had received minor injuries.

The driver who had driven away from the accident spot was identified as Puran Yadav, a native of Jharkhand. He was held from Parsoli area in Chittorgarh.

“He has been booked for rash and negligent driving,” said a police officer.

The car in which Jashodaben and her relatives were travelling collided with the truck on Kota-Chittor highway, some 60 kilometers from Chittogarh town. The deceased was identified as Basant Bhai who was driving the car when the accident occurred. He died on the spot due to excessive bleeding.

According to reports, Jashodaben and her relatives had come to Kota to attend a family function. The family was travelling from Atru in Baran to a place called Unjha in Gujarat.

They included a five-year-old child and a police gunman who was provided to her for security. A woman, identified as Vimla Modi, the gunman Yatendra and the child sustained injuries in the accident. Vimla and Yatendra were  rushed to a hospital in Udaipur for treatment. Jashodaben left for Ahmedabad after the mishap. She was provided first-aid.