She accepted the party membership in the presence of Congress president Sachin Pilot at the party’s headquarters in Jaipur. 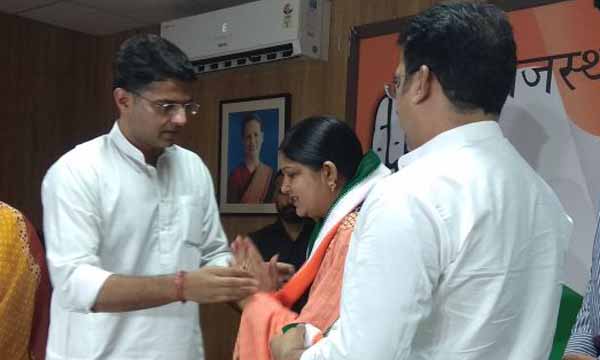 Sona Devi and Pilot addressed a press conference after she joined the party. Pilot said that she has accepted the party membership unconditionally.

“I am deeply influenced by the public welfare work being carried out by Congress at the national and regional level and its state leaders such as Sachin Pilot. I will shoulder any responsibility I am entrusted with as a party worker,” Sona Devi said.

Sona Devi said that she and the other NUZP MLA Kamini Jindal had supported the BJP during the previous Rajya Sabha elections.

“We were promised that in exchange for our support, the BJP will carry out public welfare works in Sriganganagar, but nothing was done. It shows that they can’t be trusted,” Sona Devi said.

She also slammed the BJP government for the alleged atrocities on Dalits during the Bharat Bandh in April.

“I was so saddened by this that I decided to join the Congress,” Sona Devi said.

Zamidara Party had fielded its candidate for the first time during the previous assembly elections. Two of its candidates – Soni Devi and Kamini Jindal – won. Both the MLAs joined the BJP recently. While Kamini is still with the saffron party, Sona Devi has switched sides.

The party was formed by influential gwar gum businessman B D Agarwal. His company Vikas WSP is the largest exporter in the world of ‘gwar gum’.

Sona Devi, a first-time MLA from Raisingh Nagar in Sriganganagar district, is one of the youngest MLAs aged 27.

“Her achievements at such a young age and despite being from a humble background are really inspiring. Her presence will strengthen the party in Sriganganagar,” said Pilot.