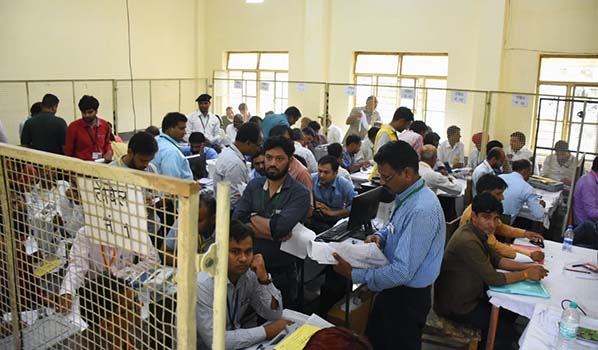 While BJP candidate Ramcharan Bohara is pitted against Jyoti Khandelwal of the Congress in Jaipur parliamentary constituency, the fight in Jaipur rural is between Rajyavardhan Singh Rathore of the BJP and Krishna Poonia of Congress. In Jaipur city, Bohara is already racing ahead of Jyoti Khandewal. Three rounds of counting were completed by 9 am.

In Jaipur rural, Rajyavardhan Singh Rathore has taken the lead by over 2700 votes.

There will 21 rounds of counting of votes in Jaipur city, while 20 rounds in Jaipur rural. The votes are being counted in Commerce College and Rajasthan College. As many as 270 counting tables have been set up in the two colleges. Heavy security arrangements have been made at the counting centres in Jaipur.

A total of 1075 employees have been entrusted with the task of counting the votes. There are 310 vote counting teams.

The city residents glued to their TVs since morning. Many restaurants and cafes have put up big screens to broadcast the results live. Both the Congress and the BJP works are claiming their victory.

According to the early trends, the BJP has taken the lead in nine parliamentary constituencies in Rajasthan.

The Lok Sabha elections 2019 were conducted in Rajasthan in two phases. The voting for 13 constituencies in the fourth phase took place on April 29. The constituencies reported a record voter turnout of 68.22%.