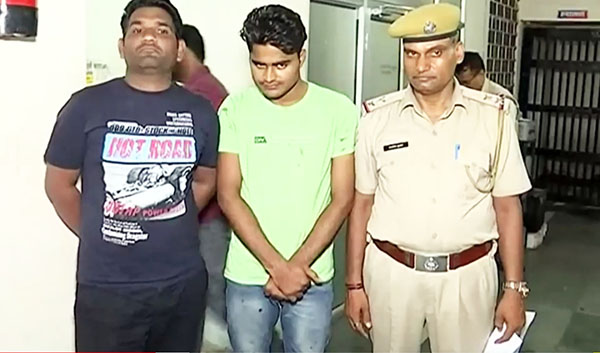 The cab driver and his friend (in green t-shirt) who were arrested for assaulting a modelling aspirant.

Jaipur: A 21-year-old girl went through a horrifying experience after she got into a cab in the city on Thursday night. The friend of the cab driver who was already in the vehicle took him at gun point and then molested her.

The gun was fake, but the scared girl somehow managed to muster courage and chewed the tongue of the culprit. She got out of the cab and ran for safety. The police arrested the cab driver and his friend when they turned up at SMS Hospital for treatment.

According to the police, the accused were identified as Sachin Sharma and Suresh Kumar. Suresh was the cab driver, while Sachin is his friend. The girl who originally hails from Agra works as model and is currently pursuing BBA. She stays in a rented accommodation in Chitrakoot.

“The girl had attended a birthday party at a club on Ashram Marg. She hired a cab to go back to her place. When she got into the Ola cab, she saw somebody already sitting in the rear seat. The driver told her that the passenger was his friend. As soon as the girl got into the cab, Sachin took out a bogus gun and pointed it at her. He tried to kiss her, but the girl chewed his tongue and managed to get out of the cab,” said the officer.

The girl went to the local police station and registered a complaint. A police team was rushed to SMS Hospital where both were arrested.

Sachin is a resident of Bhusawar in Bharatpur. He works as a property dealer in Jaipur and lives in Jagatpura. Suresh lives in Vidhyadhar Nagar slum area.