In the FIR, the woman alleged that she came to work at Perl Apartment in C-Scheme through a domestic help services agency in January. The landlord’s son Shaurya, sexually exploited her. She became pregnant. 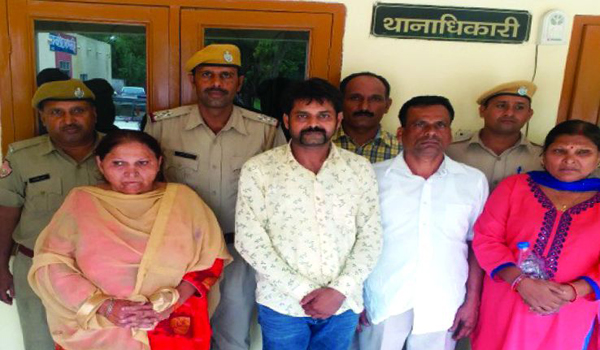 Four persons who were arrested from Delhi

Jaipur: Ashok Nagar police on Thursday arrested four people including a couple from Delhi for blackmailing a rape accused. The accused persons had demanded Rs 50 lakh to withdraw the case filed by the victim against the accused, identified as Shaurya Kataria. The police recovered Rs 3 lakh cash from their possession. The accused run a domestic help agency in New Delhi.

The accused were identified as Saurabhdas, a resident of Khanpur in Delhi, Jagdev Behuria and Jagdev’s wife Laxmi and Vimla Devi. Jagdev lives in Sarita Vihar in Delhi, while Vimla belongs to Faridabad.

According to preliminary reports, a woman who belongs to Orissa, had registered an FIR against Shaurya Kataria on August 8.

In the FIR, the woman alleged that she came to work at Perl Apartment in C-Scheme through a domestic help services agency in January. The landlord’s son Shaurya, sexually exploited her. She became pregnant.

One Saurabhdas, the husband of the rape victim’s relative, started blackmailing Shaurya. He demanded Rs 50 lakh to reach a compromise and withdraw the case. The family members of Shaurya informed the police following which the mobile phone of the victim’s relatives were put under surveillance. The relatives allegedly agreed to accept Rs 22 lakh for reaching a compromise.

“The relatives demanded Rs 3 lakh before the victim records her statements in a court. They agreed to take the remaining amount of Rs 19 lakh after the statements,” said a police officer.

Saurabhdas allegedly asked Shaurya and his family members to come to Delhi to hand over the money. The teams of Ashok Nagar and Mansarovar police stations caught Saurabhdas, Jagdev, Laxmi and Vandana red-handed taking Rs 3 lakh and arrested them for blackmailing. The trap was laid near Apolo Hospital in Delhi.