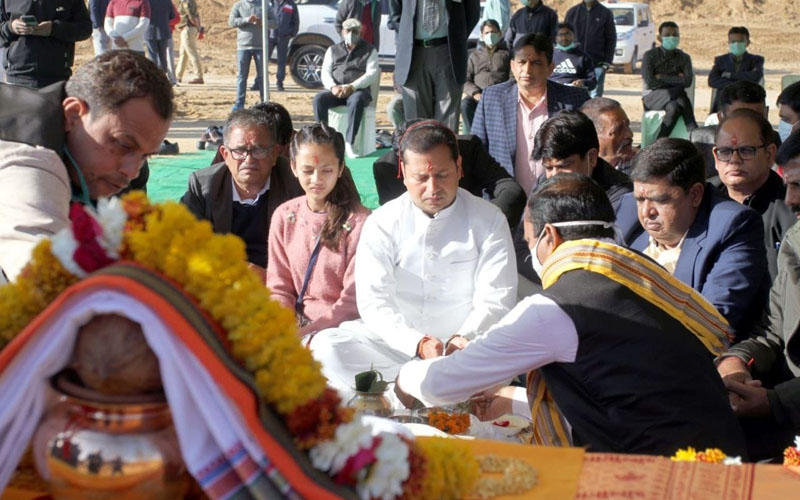 Jaipur: The foundation stone of Chonp International Cricket Stadium was laid on Saturday. It will be the world’s third-largest cricket stadium, according to the officials. It will be constructed in Chonp village on Jaipur-Delhi Bypass, nearly 35 km from Jaipur.

On this occasion, Gehlot said that this was a golden opportunity for Rajasthan cricket. Former RCA President CP Joshi had this dream of Jaipur having a ricket stadium, Gehlot said adding that this would the world’s third-largest stadium, a matter of pride for the cricket lovers in Rajasthan.

Gehlot said that having Deepak Chahar, Mahipal, Rahul Chahar, Khaleel Ahmed and now Ravi Bishnoi in the Indian team was a big achievement.

“With more and more players joining the India team, BCCI would no longer be able to ignore Rajasthan. We would get more IPL matches. The state got the opportunity to host an India-New Zealand match recently. We hope that more matches will be organized in the future. BCCI will get full support from the Rajasthan government,” Gehlot said.

BCCI President Sourav Ganguly said that he had played in Jaipur. SMS Stadium is outstanding. But now we are getting the world’s third-largest stadium,” Ganguly said.

Rajasthan Cricket Association President Vaibhav Gehlot said that RCA aims to complete the project of this international stadium in less than 3 years.  Spread over 100 acres of land, the Jaipur stadium will be the second-largest stadium in the country and the third-largest in the world,” said Vaibhav Gehlot.

The seating capacity will be over 75,000 people. The stadium will be constructed in two phases and will feature 11 cricket pitches, 2 practice grounds, a cricket academy besides hostel, parking, sports club, hotel and gym facilities, which will be of international level.

The seating capacity of Motera Stadium in Ahmedabad is 1,10,000. Australia’s Melbourne Cricket Ground (MCG) has a capacity of 1 lakh spectators. Motera is the largest cricket stadium in the world. The Jaipur stadium will become the second-largest in the country and the third-largest in the world. In the first phase, the total cost of stadium construction will be Rs 280 crore.