ED officials received a tip that Harish Bhatija, owner of Harish Forex was involved in illegal exchange and collection of foreign currency. 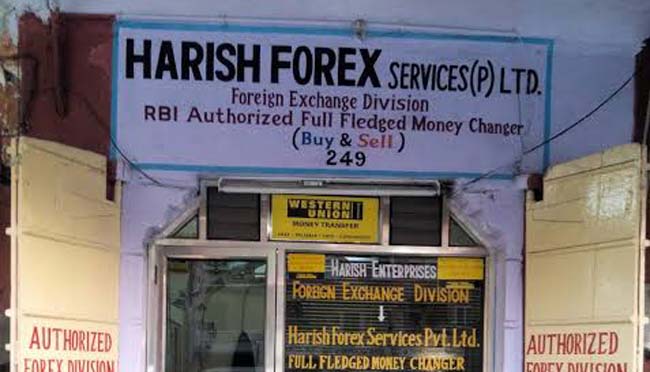 ED officials received a tip that Harish Bhatija, owner of Harish Forex was involved in illegal exchange and collection of foreign currency.

ED officials found that illegally collected and acquired foreign currencies were sent to other cities via Ahmedabad, Mumbai, etc. by Harish Bhatija with the help of his employee one Kamal Bhandari. Kamal used to carry illegally collected foreign currencies in person and transport them to various places by bus or train It was also specifically gathered after discreet enquiry that Kamal used to conceal currency in a waist pouch and socks.

On Thursday Kamal was intercepted in Jaipur and foreign currencies of 11 different countries including US dollars and Euro equivalent to Rs. 60 lakh was recovered from him which was concealed in waist pouch and socks.

Searches were conducted at a Johari Bazaar shop belonging to Harish forex and residential premise of Harish which resulted into seizure of foreign currency equivalent to Rs. 33 lakh and Indian Currency worth Rs. 90 lakh. Incriminating documents and electronic devices reflecting illegal dealings in foreign exchange were also recovered and seized during the course of searches, officials said.

The case is being probed by ED under various sections of Foreign Exchange Management Act, 1999(FEMA). Harish Forex (P) Ltd. Is authorized by RBI for legal purchase and sale of foreign currency but in garb of RBI authorization Harish Bhatija is running a racket of illegal collection of foreign currency, officials added.

Investigation under FEMA is in progress.