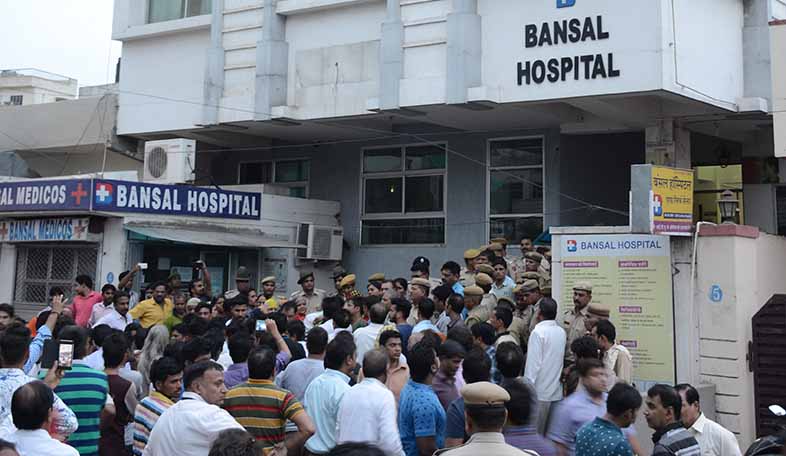 Private hospitals in Jaipur will remain shut on May 20 in protest of the attack on Bansal Hospital owner Ajay Bansal by the family members of a patient who died.

Jaipur: Hundreds of private hospitals in Jaipur will not function till at least noon on Saturday in protest of the alleged attack on Ajay Banasal, the owner of Bansal Hospital the previous day. There are nearly 450 private hospitals in the city and of them if 300 hospitals remain shut, thousands of patients may suffer, resulting in excessive patient load on government hospitals. Update: Private hospitals, government hospitals and medical shops decided to go on strike on Saturday (May 27). Click on the link below to know more: Hospitals, medical shops go on a day’s strike in Jaipur The decision to close the private hospitals was taken by various medical organizations after the wards of a patient allegedly attacked Dr Ajay Basal. Private Hospitals and Nursing Homes Society secretary Dr Vijay Kapoor told The PinkCity Post that a meeting of doctors would be held at noon to discuss if the strike would continue. "We would see what action police takes against those involved in the attack," said Kapoor. He claimed that big corporate hospitals in Jaipur have also supported the strike and their emergency units would remain closed till noon. The city police booked Bansal hospital doctors for negligence and also registered an FIR against the family members allegedly involved in the attack on Ajay Bansal. One Ratanlal Saini, resident of Tonk Phatak in Adarsh Nagar area, was admitted in the hospital after he complained of chest pain. He died while undergoing treatment. The doctors alleged the family members went on rampage in the hospital and attacked Bansal with sharp-edged objects. Bansal sustained serious head injuries and got nearly 45 stiches. He was also attacked on the chest. He was rushed to SMS Hospital where doctors said his condition was out of danger. The police have registered an FIR and said that an investigation has been launched. More than 400 doctors gathered at SMS Hospital trauma centre as the news of attack on Ajay Bansal spread. They blocked Tonk Roda till 10.35 pm. Senior police officers arrived at the scene and tried to placate the agitating doctors, but they didn’t budget. When the police assured them of arresting the accused immediately, they finally cleared the road block. Various organisations including Private Hospital and Nursing Home Society, Jaipur Medical Association and Medical Practitioners Society called for a bandh. It was decided that all private hospital services including emergency units would remain closed till noon on Saturday. However, some hospitals were of the opinion that emergency units should be kept open. Senior SMS Hospital doctors including superintendent Dr DS Meena said that Dr Ajay Bansal received 46 stiches on his head. He also has broken nose. Note: Want to share this story with someone? Just click on the WhatsApp or Facebook icon below:
Follow @ThePinkcityPost