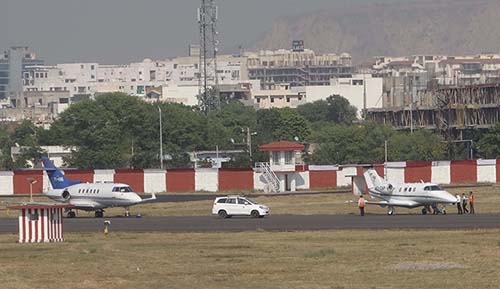 Jaipur: The customs department on Friday arrested a youth for attempting to smuggle gold wroth nearly Rs 36 lakh at Jaipur International Airport. The youth was bringing the gold from Dubai. It had been melted in a form of wires. The wires had silver coating to conceal the gold.

The customs department also took into custody two youths outside the airport who had come to receive the accused smuggler. Interrogation with the trio is going on.

The youth had flown to Jaipur from Dubai in an Air India flight. He got off at the Jaipur Airport. When he was getting through the customs check, the officials got suspicious and thoroughly searched him. They found about 702 grams of gold in two bags. He was immediately taken into custody when he couldn’t give satisfactory explanation about the gold. His identity is yet to revealed.

The gold was melted in form of thin wires. The wires had silver-colour coating.

“The gold weights over 700 grams and worth about Rs 36 lakhs,” said an official adding that the three youth were being interrogated as to where the gold was to be delivered.

There had been many instances of gold smuggling through the Jaipur International Airport recently.