Jaipur: 4 students climb atop mobile tower near Commerce College, panic in the area

Four students climbed over a mobile network tower near Commerce College in Jaipur in support of Congress MLA Dheeraj Gurjar on Wednesday. 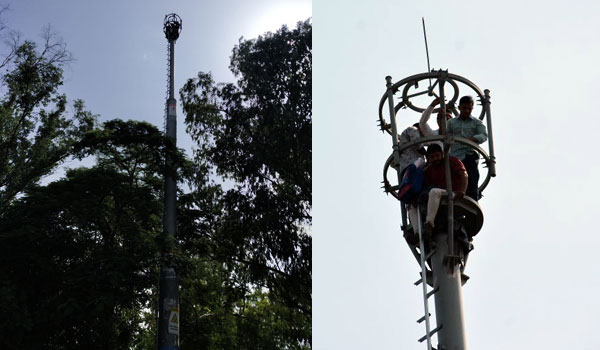 Jaipur: Four students climbed over a mobile network tower near Commerce College in Jaipur in support of Congress MLA Dheeraj Gurjar on Wednesday. Police and officials reached the spot with rescue teams, but students didn’t climb down. Students warned the officials that they would immolate themselves if their demands were not met. A civil defence team tried to persuade students to come down. They put up a net encircling the tower. As per preliminary reports, these students named Mahavir Gurjar, Shishram Gurjar, Arvind Gurjar, and Nishant Sharma are NSUI supporters. The students climbed over the mobile tower around 9:30 am on Wednesday. Students gave an ultimatum of 24 hours demanding that the government respond to the demands of MLA Dhiraj Gurjar and his team who have been observing an indefinite fast for the past six days in Bhilwara. The students threatened of committing suicide if the demands were not met. Congress MLA Dhiraj Gurjar’s health has been declining rapidly. According to doctors, the amount of glucose is decreasing in his body. Congress supporters of the area are also protesting with him. In a similar case reported at Pratapgarh on Tuesday, six students climbed over the water tank at the collectorate premises. The students were protesting against the government demanding constable recruitment. They came down from the water tank after 10 hours.
Follow @ThePinkcityPost