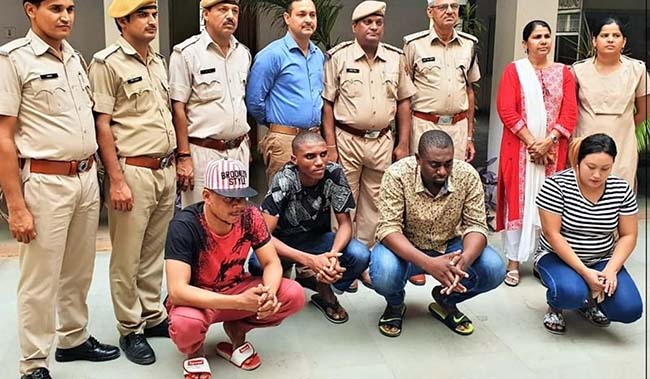 Nigerian nationals and a Nagaland woman who were arrested for cyber crime in Jaipur.

Jaipur: The cyber crime police on Friday busted an international gang of cyber criminals and arrested three Nigerian nationals and a woman from Northeast India for duping a CRPF jawan of Rs 20 lakh. The gang had allegedly duped several people in many states. They collected about Rs 2.5 crore over the past five months. The accused operated a bogus fast food shop in Vikaspuri of Delhi.

The accused persons were identified as James, David, Mike and Yengartula. While James, David and Mike are residents of Nigeria, the woman belongs to Nagaland.

“The woman befriended a CRPF jawan – Suresh Kumar belonging to Sikar district in Rajasthan through WhatsApp and Facebook. He registered an FIR on June 4 that the gang duped him of Rs 20 lakh following which an investigation was launched. The woman had identified herself as Jenny Scott,” DSP, cyber crime Mohar Singh said.

The woman sent some air tickets and told Suresh, currently posted in Telangana, that she would be travelling to India with US$50,000.

The Nigerian nationals – posing as customs officials – called Suresh and told him that his friend – the woman – was in their custody because she was carrying foreign currency without valid documents. In order to release her, they demanded money. Suresh deposited about Rs 20 lakh over a period of seven days in the bank accounts provided by the gang members.

It has come up during preliminary investigation that the gang had a PoS (Point of Sale machine) which they used to withdraw the money deposited by victims.

A cyber crime police station team was rushed to Delhi. The four were arrested. The three Nigerian nationals were also flouting visa norms by overstaying in India.