Jaipur: 3 children among 4 burnt alive in fire at chemical factory in Jamwaramgarh 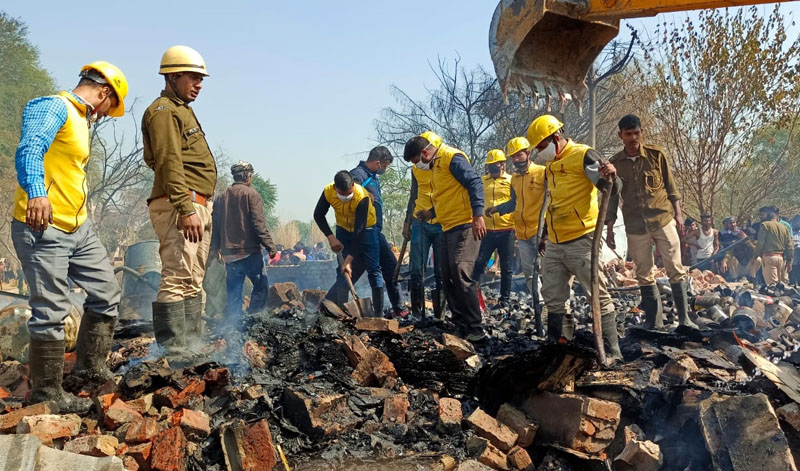 Firefighters trying to control the fire at a factory in Jamwaramgarh.

Jaipur: A massive fire broke out at a chemical factory in Jamwa Ramgarh area of Jaipur rural on Sunday. Four people including three children – aged between 2 and 5 years – were burnt alive. Their charred bodies were found after the fire was doused, according to preliminary reports. It took firefighters and civil defense teams almost four hours to control the fire.

The fire broke out at the chemical factory located in Dhularaoji village of Jamwaramgarh. Many people were working in the factory. Their families – particularly children were also there. As soon as the fire broke out, there was a stampede-like situation.

According to preliminary reports, three children identified as Garima (3) Ankush (5) and Divya (2) were trapped in the fire. One Ramesh Arya alias Kalu (25), the nephew of the factory owner Shankarlal, who was present on the spot, rushed inside to rescue the children. But he too got trapped.

The bodies of the four victims were pulled out after the fire was brought under control. A few others including one Parvati (45) are said to have sustained burn injuries. They are currently undergoing treatment at a hospital. Goods and property worth lakhs were gutted in the fire. The fire is believed to have started in the factory due to short circuit.

The witnesses said the fire broke out in the turpentine oil factory.