Internet ban takes a toll on business in Walled City 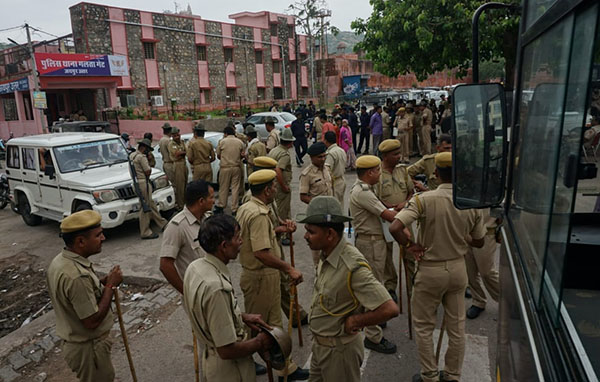 Jaipur: The ban imposed on mobile internet services following communal tension in Ramganj and many nearby areas is affecting normal life and business in the Walled City colonies and markets. The traders said that the customers are avoiding the markets due to the tension and also as they are unable to book taxies. Digital payments are also not working.

The administration had suspended internet services in 10 police station areas on Tuesday following communal clashes for two days in a row. The people from two communities started a confrontation at Rawalji Chauraha and Badanpura. More than 30 vehicles were damaged and 10 people injured in the stone pelting.

The ban was extended to 15 police station areas on Thursday keeping in view the heavy security arrangements on Independence Day.

“People are not able to make payments digitally so that they can’t book taxies and are not able to pay for merchandise in the Walled City areas. They are also avoiding the markets due to the communal tension. Our business has suffered greatly due to this,” said Ramdhan Agarwal, a Subhash Chowk-based trader.

The chief minister Ashok Gehlot will take a meeting of senior police officers including the DGP to discuss the prevailing law and order situation in the communally sensitive areas. He said that the miscreants involved in causing communal tension will not be spared and brought to book.

The tension was triggered on Sunday when some people attacked people from another community. The clashes were reported on Monday. The tension escalated since Tuesday morning as there were reports of people hurling stones on a religious place in Galta Gate area. The police appealed for peace and harmony but people again started a confrontation in the evening, causing the police to clamp section 144 of CrPC.