Hit and Run accident: Constable dies after being mowed down by car in Jaipur

Home » City Reports » Hit and Run accident: Constable dies after being mowed down by car in Jaipur 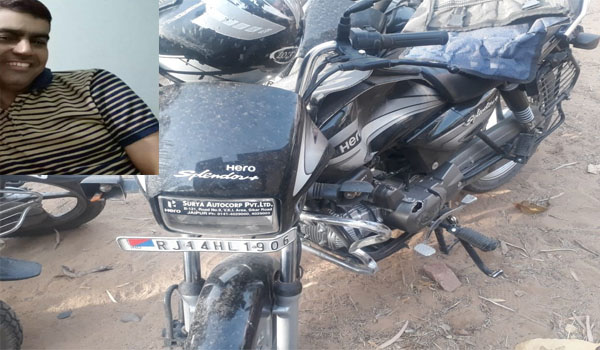 The deceased constable Hawa Singh and his bike.

Jaipur: A police constable identified as Hawa Singh died after an over speeding car rammed into his bike near Vishwakarma Road Number – 5 in Jaipur around 11 pm on Sunday. The driver of the car managed to flee from the spot. Police have launched a search for him.

The deceased Hawa Singh was the resident of Neem Ka Thana town in Sikar district of Rajasthan and was posted in South Traffic Police at Jaipur.

According to the police, Hawa Singh was on his way home located in Murlipura around 11 pm on Sunday. Suddenly, a speeding car crashed into his bike. The car sped away from the spot. Singh got seriously injured in the accident.

Police teams and aan mbulance rushed to the spot after receiving the information and took the injured constable to a nearby hospital. He died while undergoing treatment at a hospital on Sunday Night.

Police informed his family members and handed over the body to them after a post mortem examination.

Grief gripped the relatives and the traffic police administration after the death of the constable Hawa Singh.

Police are studying CCTV footages to identify the vehicle registration number of the car.