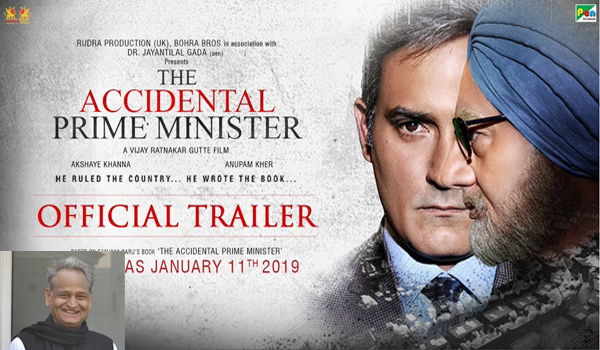 He said that it was an attempt at distorting history and defaming Jawaharlal Nehru.

“There is no substitute of truth, you cannot distort history. There has been an attempt to defame Nehru also. Let the truth triumph alone, you cannot erase history,” he said.

Gehlot said that the propaganda will not work and the truth will prevail. Distorted facts have been used in the film.

The BJP tweeted on Thursday, ‘Riveting tale of how a family held the country to ransom for 10 long years. Was Dr. Singh just a regent who was holding on to the PM’s chair till the time the heir was ready? Watch the official trailer of #TheAccidentalPrimeMinister, based on an insider’s account, releasing on 11 Jan!’

Anupam Kher who is playing the role of Dr. Mammohan Singh in the movie said that no one can change facts. “More they protest, more publicity will they the movie get. The book has been out since 2014, no protests were held since then, so why now? The movie is based on the facts in the book,” he said.

I&B Minister Rajyavardhan Singh Rathore tweeted, ‘Can’t we extend our wishes for a film? Congress has been all for freedom, why is it questioning that freedom now.’

The trailer of the ‘The Accidental Prime Minister’ was released on Thursday. The movie is based on a book by Sanjaya Baru, who was Singh’s advisor during his PM’s tenure between 2004 and 2008. The book was released in 2014.