A total of five men have been arrested in connection with the broad daylight murder. The police have arrested Mahendra, Ramniwas and three others including Amandeep and Ashok. 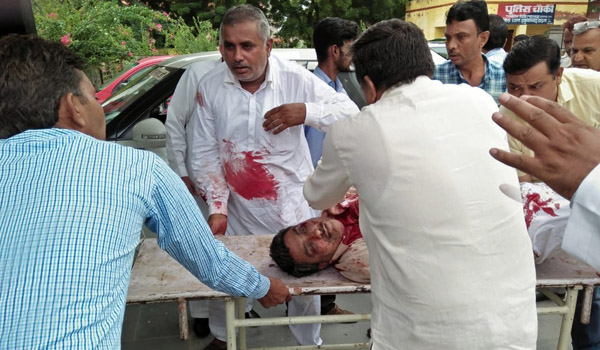 Jaipur: Hanumangarh police have arrested one Mahendra Poonia, the chairman of Kendriya Sehkari (Cooperative) Bank, for his alleged role in the Harveer Saharan murder case. Mahendra Poonia allegedly hatched the conspiracy to murder Saharan, the husband of Rawatsar municipality chairperson. He allegedly paid Rs 20 lakh to Ramniwas Mahla to murder Harveer. It was a supari killing, senior police officials said.

A total of five men have been arrested in connection with the broad daylight murder. The police have arrested Mahendra, Ramniwas and three others including Amandeep and Ashok.

IG, Bikaner range Dinesh MN held a press conference at SP office on Wednesday and told the media persons that it was a contract killing.

Saharan was shot dead outside SDM office in Rawatsar two days ago. Harveer sustained six bullet injuries and rushed to a hospital in Hanumangarh in a critical condition. The victim died at a hospital while undergoing treatment.

The family members of Harvir Saharan had demanded a CBI probe in the matter and named Ramniwas as one of the accused in the FIR lodged with Rawatsar police station.

“Mahendra Poonia was booked for criminal conspiracy and homicide in connection with the murder. He has been arrested. His name came up when Ramniwas Mehla was interrogated and we examined other evidence in the case,” said a senior police officer.

A meeting was called at the victim’s house on Tuesday. The meeting was attended by a large number of people from Jat community and politicians including MLA Hanuman Beniwal. They demanded a CBI probe into the daylight murder.