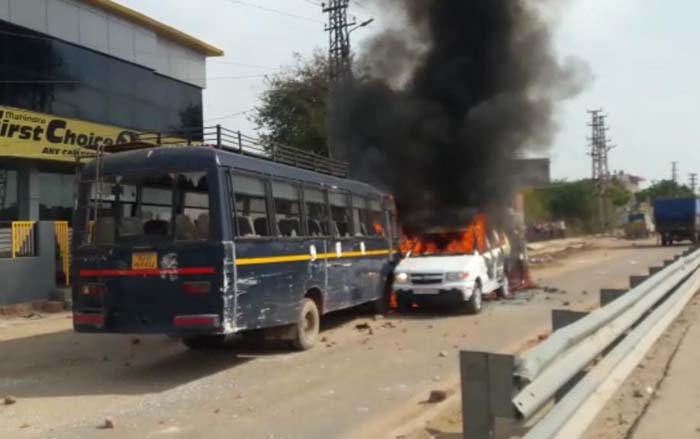 Vehicles set on fire by Gujjars in Dholpur.

Jaipur:  Gurjar agitation for reservation in government jobs turned violent in Dholpur district of Rajasthan on Sunday. The protestors set on fire three vehicles. There were reports of some policemen getting injured in the stone pelting. Senior police officers including SP Dholpur Ajay Singh are on the spot to restore law and order.

Police fired tear gas and resorted to lathicharge as the protestors hurled stones. The protestors blocked the Delhi-Mumbai National Highway – 3 after gathering at Waterbox Junction on Sunday morning. When the police tried to stop the agitators, they started hurling stones. Some policemen were injured. The protestors then set three vehicles parked nearby on fire. The police fired in the air to disperse the crowd, causing a stampede like situation. Heavy police force was deployed in the area after the clashes that went on for nearly three hours.

The protestors continued to block Karauli-Hindaun Road. They placed stones on the road to prevent plying of vehicles on Hinduan-Gangapur-Nagapur Road.

Kota Railway Circle has cancelled 25 trains till February 13 and diverted 26 others.