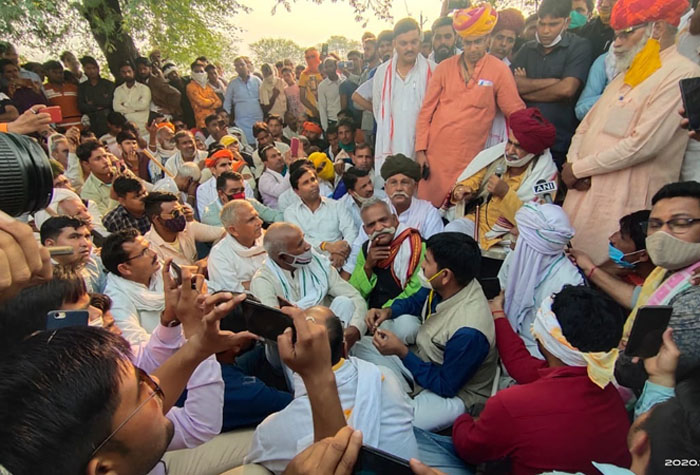 Jaipur: The supporters of Gujjar community leader Colonel Kirori Singh Bainsala group continued to block Delhi-Mumbai railway tracks on Monday, a day after their agitation for reservation in government jobs and other demands began in Rajasthan. The agitators also blocked Hindaun Road. Those who are blocking the tracks include Vijay Bainsala who is the son of Colonel Kirori Singh Bainsala.

The agitators uprooted plates of Delhi-Mumbai railway tracks. Over 60 trains were diverted on Sunday. Two trains were cancelled on Sunday, while four on Monday. Over 220 buses from Hindaun, Karauli, Bharatpur, Dausa and Bayana Depots were halted due to the agitators blocking roads.

Sports minister Ashok Chandana was in Bharatpur. He was scheduled to meet the agitators on Sunday evening, but had to return to Jaipur as the talks couldn’t be held. The minister told media persons that he could not reach the agitation venue due to heavy traffic jam. He called Colonel Kirori Singh Bainsala who asked him to speak to his son Vijay Bainsala. The son told him that he could call in a few minutes, but never did.

A section of the Gujjar community led by Colonel Kirori Singh Bainsala has presented six demands to the government including 5% reservation, backlog recruitment, and compensation to the family members of those killed in previous agitations.