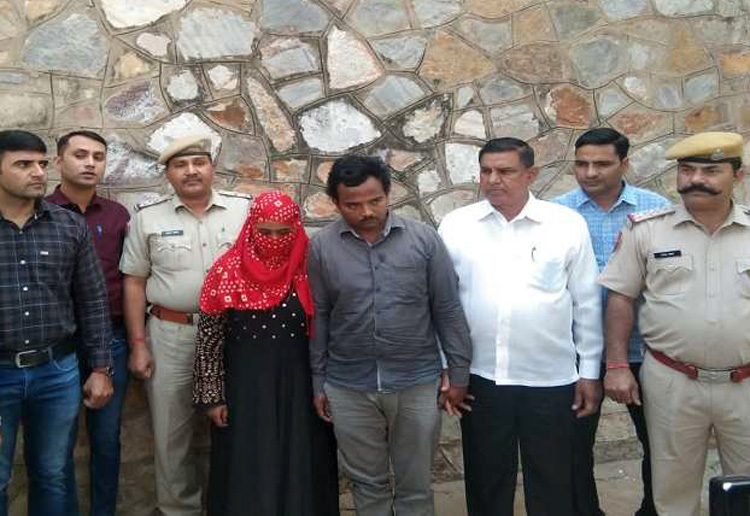 Anees and his girlfriend in police custody.

Jaipur: Jawahar Nagar police has arrested a man and his girlfriend for threatening a garment trader with a dummy timer bomb. The man, identified as Anees Ahmed, was the employee of the trader – Vibhu Gupta. The woman Shushila is Anees’s girlfriend. The duo made the timer bomb after watching a few videos on Youtube and then sent it to the trader in a cake box with a letter threatening to blow off the bomb if he didn't pay Rs 10 lakh.

Anees has primary education. After getting the cake box delivered, Anees and his girlfriend fled to Ajmer where they visited the dargah to offer prayers. He has told the police that he knew electric work which helped him make a dummy timer bomb that looked shockingly similar to an actual bomb. In the dummy bomb, no explosives were used, but it looked genuine to the extent that it scared even the cops.

Anees wanted to make quick money, so he hatched the conspiracy to extort his own employer. After bringing his girlfriend on board, he executed the plan.

He bought an alarm clock and turned it into a timber bomb using coloured wires and a battery. Forty-year-old Anees hails from Uttar Pradesh, while Sushila is his sister-in-law’s daughter. He separated from his wife and lives in Jaipur.  He has four children.

Anees used to work at home. He would take unfinished garment items from Vibhu’s showroom and did job work on them. He had been working for Vibhu for the past few years. The trader and Anees worked at a showroom in Sodala earlier. Vibhu recently opened his own in Panchvati Circle area.