Four members of a Kota family killed in accident in Bundi

The victims – Sampat Raj Sharma, a prominent marble businessman in Kota – had gone to Bhilwara to invite guests for the wedding of his daughter when the mishap occurred.

Jaipur: Four members of a family from Kota were killed in an accident in Dabi area of Bundi district early on Monday.

The victims – Sampat Raj Sharma, a prominent marble businessman in Kota – had gone to Bhilwara to invite guests for the wedding of his daughter when the mishap occurred.  Sampat Raj Sharma was travelling with his wife Seema Sharma, daughter-in-law Neetu and granddaughter Jiya. All four were killed.

The accident happened on Karaondi –Patiyal highway (number – 27) around 1 am on Monday.

“They had gone to Bhilwara to invite relatives for wedding of Sampat Raj’s daughter. They left Bhilwara for Kota around 9.30 pm. Around 1 am, their car lost balance and overturned when a stray nilgai suddenly appeared on the road,” said a police officer. 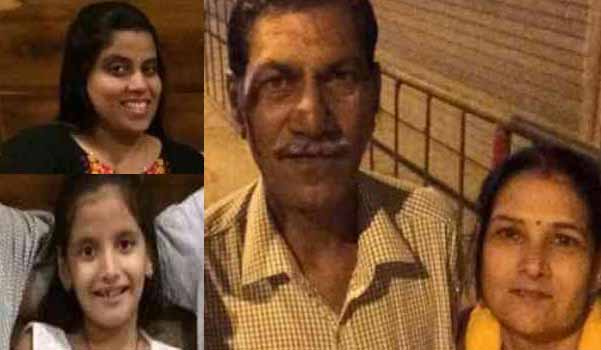 Victims of a family including a marble businessman who were killed in accident.

The officer said that Sampat Raj Shama (57) got stuck under the car and died on the spot. His wife Seema (52), daughter-in-law Neetu (36) and granddaughter Jiya (9) were rushed to a private hospital in Talwandi area where Neetu and Seema were declared dead during the treatment. Jiya succumbed to injuries in the afternoon on Monday. Sampat Raj’s son Manish was also injured in the mishap. He is undergoing treatment in a critical condition.

The wedding of Sampat Raj’s daughter Neelam was scheduled for February 6, while son Manish was to get married in June.