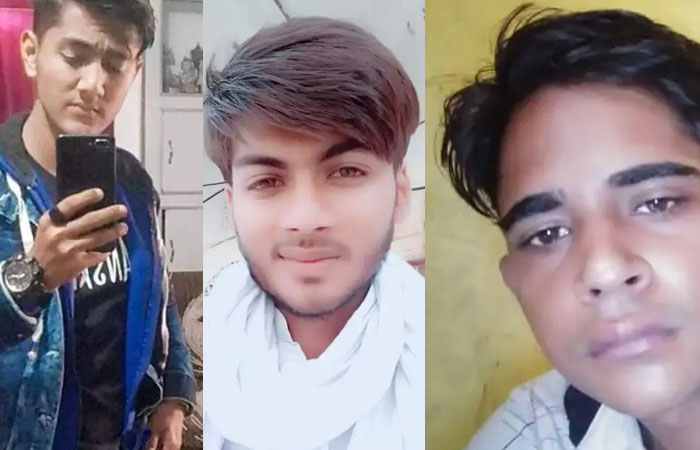 Three of the four victims in the Tonk accident.

Jaipur: Four people including three youths on their way to Madhya Pradesh from Bharatpur were killed when their car lost balance and hit a road divider late on Friday. The deceased men who belonged to Bharatpur district died on the spot. One of the victims is undergoing treatment and his condition is stated to be critical. Police officials said that one of the victims had his birthday on Saturday and they were going to a picnic spot near Udaipur to celebrate it. They were then planning to go to Ujjain.

According to the police, the victims were identified as Hemant Agarawal, Diwakar Sharma, Arihant Jain, and Krishna Saini. Arihant was to celebrate his birthday on Saturday, so he and his three friends – Hemant, Diwakar, and Gulshan – aged between 20 and 22 years – hired a car. All of them were residents of Kaman area in Bharatpur. Krishna was the driver. Gulshan was seriously injured in the mishap that occurred near Saroli Mod in Tonk around 12.45 am on Saturday.

The bodies were stuck in the car when the police arrived at the spot after receiving the information from local villagers. When the police were pulling out the bodies, one of the victims received a phone call. The police answered the call. The caller – a friend – identified the victims.

Three of the four friends were from the business community, so the local traders in Kaman kept their commercial establishments closed to mourn the deaths.

The police have handed over the bodies to family members after a postmortem examination.