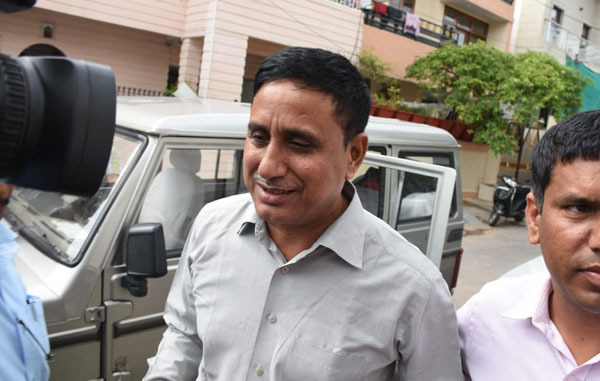 Former ACP Aas Mohammed being produced before a magistrate.

Jaipur: Former ACP of Jhotwara Aas Mohammed who surrendered before ACB in Kota on in a bribery case was produced in a court in Jaipur on Saturday. The court remanded him in judicial custody till August 26. Since it was a holiday on Janmashtami, he was produced at the house of the magistrate. ACB officials said that the officer would be interrogated about his wealth. The agency had examined many files pertaining to cases investigated by the ACB Aas Mohammed and allegedly found some irregularities.

Aas Mohammed had been missing for almost six months after his name cropped up in a bribery case. He surrendered Add SP ACB Thakur Chandra Sheel on Friday. He was brought to Jaipur on Saturday and produced before a magistrate. He was remanded in police custody.

Aas Mohammed kept smiling during his appearance before the magistrate.

ACB had in February arrested assistant public prosecutor (APP) Chandrabhan Joshi, a police head constable of Jhotwara police station Battu Khan and a middleman Sumant Singh for allegedly taking a bribe of Rs 1 lakh. Battu Khan was the reader of Jhotwara SHO Pradeep Charan so the ACB team carried out raids at the houses of Charan and Jhotwara ACP Aas Mohammed. The ACB later claimed that Aas Mohammed was the kingpin of the bribery racket and registered an FIR.

The ACB complainant one Rajveer had a case registered against him with Jhotwara police station under sections 420, 406,467, 468 and 471 of IPC. He was arrested and released on bail. His wife was a co-accused. In order to remove her name from the case, Battu Khan and Sumant Singh were allegedly demanding Rs 5 lakh and had already received Rs 3 lakh.