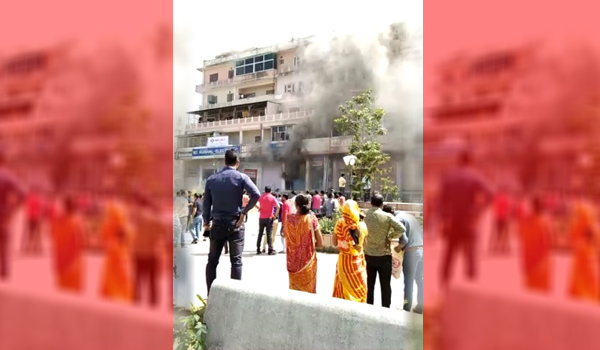 Fire broke out in Shivam Apartment in Central Spine

Jaipur: A massive fire broke out at the two shops of Shivam Apartment situated in Central Spine in Vidhyadharnagar area in Jaipur on Saturday. Fire tenders with fire fighters reached the spot and the rescue work is in process.

As per sources, some people were stuck in the apartment building and the fire fighters managed to rescue them.

The fire broke out around noon. The employees informed the police control room following which fire department was put on alert. Fire fighters were rushed to the spot and fire tenders were pressed into service.

Hundreds of people gathered near the spot adjacent to Central Spine of Vidhyadharnagar when the incident happened. The entire area was cordoned off and the traffic diverted during the fire fighting operation. The reason for the fire or the extent of damage is yet to be ascertained.

Fire officials said that they were informed about the fire at Vidhyadharnagar in the morning. Fire tenders reached the spot. After seeing the flames at the Shivam Apartment, the fireman launched rescue operation.

The rescue work and further investigation of the cause of the fire is going on.