Fire breaks out at plastic factory in Malviya Nagar

Dozens of fire tenders were pressed into service and the fire fighting continued for over two hours. Short circuit is suspected to be the reason. 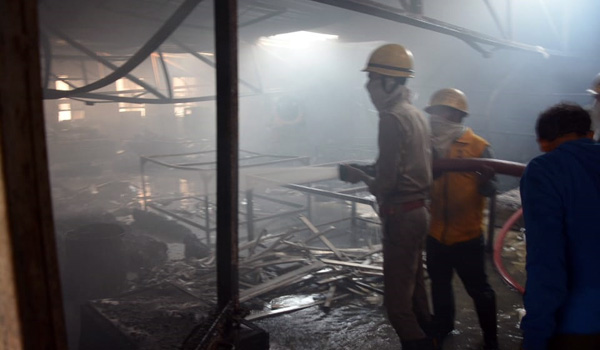 Fire operation at the plastic factory near Malviya Nagar in Jaipur.

Jaipur: A massive fire broke out at a plastic factory near Apex circle of Malviya Nagar area in Jaipur on Tuesday.

Eight fire tenders were rushed to the spot from different fire stations of the city. It took firefighters nearly two hours to control the fire. There were no reports of loss of life.

Hundreds of people gathered near the spot adjacent to Apex Circle at the industrial area of Malviya Nagar on Tuesday. The entire area was cordoned off and the traffic diverted during the fire fighting operation. The reason for the fire is suspected to be short circuit.

“Fire tenders were pressed into service and the fire fighting continued for over two hours. Short circuit is suspected to be the reason that caused the fire;” said a police officer.

The fire broke out in the morning hours of Tuesday and some guards and locals saw smoke billowing from one part of the factory.

Fire officials said that they were informed about the fire at Malviya Nagar.

The local police and fire department have begun an investigation into the cause of the fire.