A local court in Jaipur has ordered an FIR against an NGO for circulating fake news about the health of an elephant, known as Suman and fraudulently collecting donation to the tune of Rs 1.17 crore. 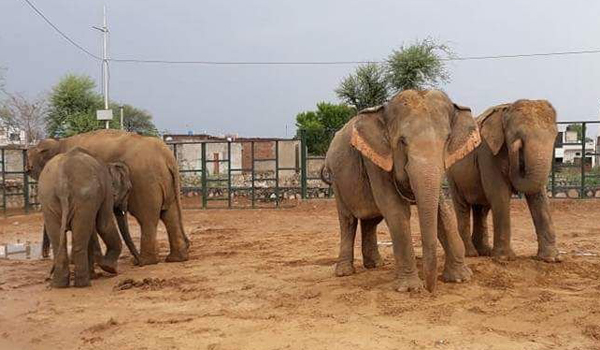 Elephant Suman and her family at Hathi Goan in Jaipur.

Jaipur: A local court in Jaipur has asked the police to initiate a probe against an NGO for circulating fake news about the health of an elephant, known as Suman and fraudulently collecting donation to the tune of Rs 1.17 crore. The NGO allegedly advertised that Suman was being kept in confinement despite suffering from tuberculosis. The elephant is sheltered at Hathi Gaon in Jaipur, a popular tourist destination. The NGO claimed that the elephant and her family were rescued with its intervention. The plea moved even some Bolywood actors and cricketers who tweeted about the elephant, causing the fake news to go viral on social media. The NGO allegedly collected Rs 1.17 crore by garnering sympathy. The owner of the elephant Sameer Khan had filed a complaint against the NGO with the court of additional chief judicial magistrate – 18 in Jaipur for spreading fake news about the elephants. The owner requested the court to have an FIR lodged against the NGO. After the news about the 6-year-old Suman went viral on social media, the Rajasthan forest department conducted a medical examination and found her and her parents to be healthy. The NGO also got news about Suman published in newspapers. It claimed that the elephant had been rescued by its team; however no such thing happened. A forest department officer said that some elephants in Hathi Gaon are suffering from tuberculosis, but they are being kept separated from other animals and undergoing treatment. “The news about Suman and her family was found completely fake,” said the officer. It is alleged that the circulation of fake news caused tourist footfall to drop by 25%. The court of ACJM – 18 ordered a probe against some representatives of the NGO and asked the police to probe the case.
Follow @ThePinkcityPost
Click on the following link(s) to find the latest & related stories on: Hathi Gaon