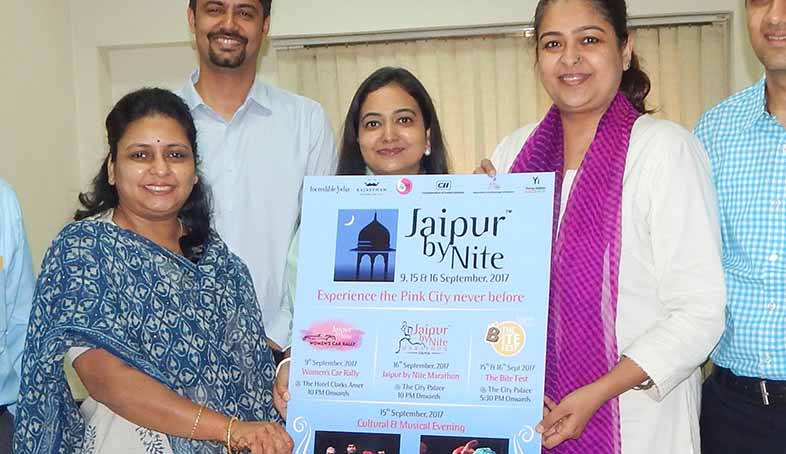 jaipur by night event in jaipur

Jaipur: Jaipur By Nite is back with its 5th edition of three days of carnival. Started with the objective of giving a fillip to monsoon and night tourism in Jaipur, the organizers are planning to organize two categories of marathons and women car rally on September 9, September 15 and September 16.

The event is being organized by the Confederation of Indian Industry (CII) in association with Rajasthan tourist department.

To deliver the message that Jaipur is safe for women at night, the women car rally will be held on September 9.  The rally will be kicked off from Hotel Clarks Amer and go to Ramniwas Bagh to spread the message, whereas on September 15, a live performance of Indian Ocean and Mame Khan will be organised at City Palace.

The two-day The Bite Fest will be a special feature on September 15 and 16 at City Palace. A Jaipur by Nite Marathon in 5km and 10km categories scheduled to take place, in which 500-600 participants are likely to take part.

Additional chief secretary, tourism, N C Goel said activities like Jaipur by Nite provide the tourist an option to know the culture and heritage of Rajasthan by night.

“Tourism growth last year was 17.3 per cent, which expected to touch the double digit figure this year. With onset of tourism season, we are hopeful to welcome 5 crore tourist footfall in the state,” Goel said.

He said that the department has spent Rs 60 crore on marketing last year, which has been increased to Rs 100 crore this year.