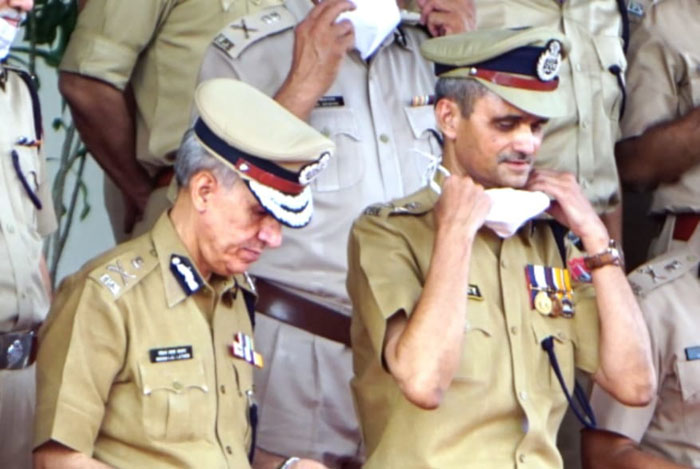 Ex-DGP Bhupendra Singh Yadav (on the right) on his last date at PHQ with ML Lathar who is replacing him.

Jaipur: Ex-DGP Bhupendra Singh Yadav who sought voluntary retirement from service about eight months before his tenure was to come to an end was appointed chairman of Rajasthan Public Service Commission. The governor gave his nod to his appointment. Yadav is likely to assume office soon. Bhupendra Singh has been replaced by senior IPS officer ML Lathar as the state DGP.

This is the first appointment by the Ashok Gehlot government in RPSC. Bhupendra Singh Yadav is replacing IAS officer Deepak Upreti who retired on Wednesday. Bhupendra Singh’s VRS application was accepted by the government on Tuesday. Sources said the file seeking his appointment as RPSC chairman was submitted to the governor office. It was instantly approved.

Bhupendra Singh has the mammoth task of filling up about 9000 vacancies. The RSPC is yet to conduct the interviews for RAS recruitment.

He had been appointed as DGP in July, 2019 and was to retire from service on December 31, but the state government extended his appointment as DGP till June 30, 2021.