Elephant safari to be launched at Nahargarh: Booking price and timing 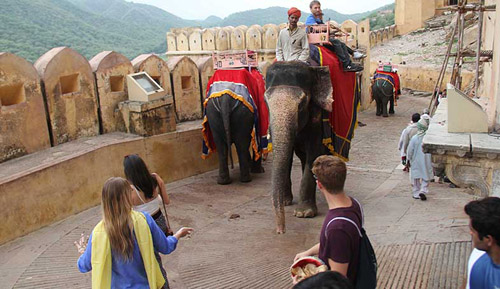 Jaipur: You will be able to enjoy elephant safari at Nahargarh Biological Park in Jaipur from November 10. This will be the latest attractions for tourists in this popular park which already houses a zoo and a lion safari. The park authorities said that the elephant safari would attract more tourists, leading to an increase in the footfall. The elephant safari is currently available at Amer Fort.

The elephant safari had been mooted in the past too, but since it was introduced in the ‘off-season’, it didn’t attract many tourists. It was shut down after 10 days.

“The tourist season has begun. Hopefully the elephant safari will attract more visitors to the park. Initially we will keep only one elephant for the safari. The number of elephants will be increased based on the demand,” said a senior park official.

The officer said that the safari will be available for two people at time. The visitors will need to pay Rs 15,00 for 10 minutes and Rs 35,00 for 30 minutes. The park timing has also been changed. The park will open at 9 am and will close at 5 pm. The new timing came into force on October 15. The same timing will be enforced till March 14.

After a temporary ban on the lion safari, it has now been relaunched at the park. The tourists can enjoy lion safari in three canters. The lion safari booking price is Rs 250 per person.