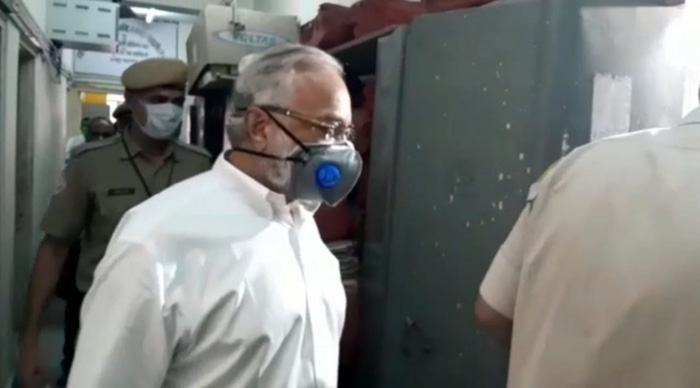 Jaipur: Former IAS officer from Rajasthan Ashok Singhavi surrendered before a special enforcement directorate (ED) court on Monday, nearly one-and-a-half years after an arrest warrant was issued against in a money laundering case. The case relates to corruption in the minding department. Ashok Singhavi had earlier been arrested by the Rajasthan anti-corruption bureau (ACB). He was released on bail in the corruption case, but an arrest warrant was issued against him in the money laundering case which was being investigated by ED separately. The court remanded him in judicial custody till June 15.

ED named eight people in the case. Of them, five had already surrendered. Two others – Rashid Sheikh and Tamanna Beghum are still absconding.

Singhavi came to the court wearing a mask with his team of lawyers on Monday and surrendered. He has filed applications in the court which will come up for hearing over the next few days.

Ashok Singhvi was Principal Secretary (Mines) when he was arrested by ACB in 2015 in an alleged case of graft involving Rs 2.55 crore. He along with five persons including two senior officers of his department were arrested in connection with the case in Udaipur and Bhilwara.

Before his arrest, the ACB conducted three raids in Udaipur and Bhilwara and allegedly seized total cash amount of Rs.3.82 crore. Rs. 2.55 crore (out of the total seizure) was to be delivered allegedly to Singhvi and other officers, the ACB officials had said at that time.

The bribe amount of Rs. 2.55 crore was allegedly taken from Chittorgarh-based mines owner Sher Khan for allowing him to restart operations in his mines, which were closed by the mines department.