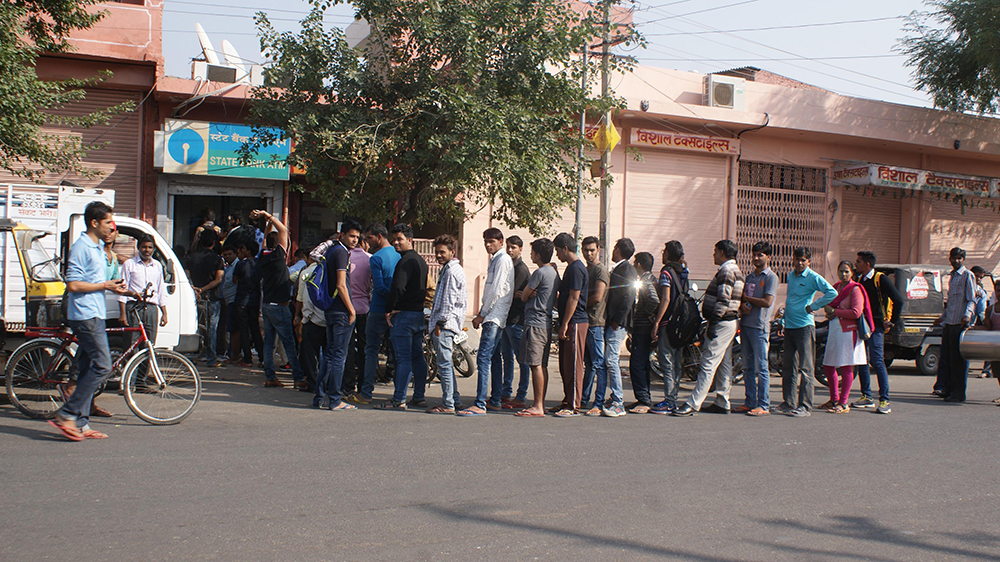 Jaipur: The chaos over the scrapping of Rs 500 and Rs 1,000 notes continued on Tuesday with people jostling for space outside banks across the city.

The private banks seemed least bothered with the plight of city residents. ATMs remained defunct. A few incidents of scuffle among people were reported while they were impatiently waiting for their turn in long queues outside banks. Cops were deployed at heavily crowded banks to keep an eye on the law and order situation.

Most ATMs were closed on Monday due to the holiday. As soon as banks opened in the morning, people turned out in huge numbers.

“I have been waiting for my turn for the past three hours,” said Ramavtaar Godara, a resident of Sanganer.

Organized gangs having a field day

Many gangs active in the city are promising people a hefty commission for exchanging old notes at banks. The banks officials said that they are trying to identify if the same person was coming to the bank to exchange notes several times.

“We are trying to keep a tab on such gangs; however, it is very difficult,” said a bank official.

Cons are trying to take advantage of the situation. On Monday, Rajasthan anti-terrorist squad arrested a sibling in possession of Rs 50 lakh cash at Jaipur railway station. The duo belonging to Ratlman in Madhya Pradesh had come to Jaipur to buy gold with now scrapped notes of Rs 500 and Rs 1000 domination. The ATS handed over the accused to the government railway police for further investigation.

Markets in the city wore a deserted look as shops remained closed on Tuesday. The shopkeepers complained their regular customers were demanding they be allowed to shop on credit.

“Since everybody seems to have run out of cash, we can’t afford to give away items on credit. It’s turning out to be very bed for out business,” said Sanwar Sharma, a shopkeeper in Sodala.