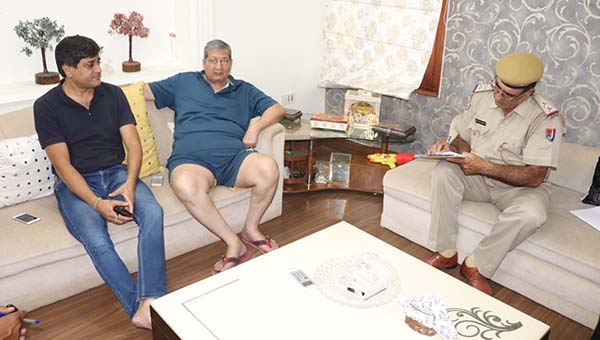 Family members giving statement to the police about the robbery at their Amer Road situated house.

Jaipur: Unidentified robbers allegedly barged into the house of a businessman, identified as Shikhar Chand Jain near Dashhara Kothi in Amer Road area on Wednesday morning, tied up the domestic help and decamped with cash and valuables, according to preliminary reports.

The domestic help has reportedly told the police that he was alone in the house as the house owner with his family had gone to visit a temple. The robbers tied him up and rummaged through wardrobes. They found cash and valuables. The exact value of the looted items is yet to be determined. The police have launched an investigation.

The robbery took place at the bungalow located at Plot No – 60 near Dashahara Kothi around 6 am. The unidentified robbers entered the house after the family members had left for the temple. They overpowered the middle-aged servant and then tied up his legs and hands. They then decamped with the booty.

The police are recording the statement of the domestic help. Police suspect that the robbers had either conducted a recee or someone close to the family is involved in the loot.

There had been a robbery in Masarovar area earlier this month. An employee of Miraj Food Mart was robbed of Rs 45. The police later found that a driver of the agency was involved in the crime. He along with five other robbers was arrested.