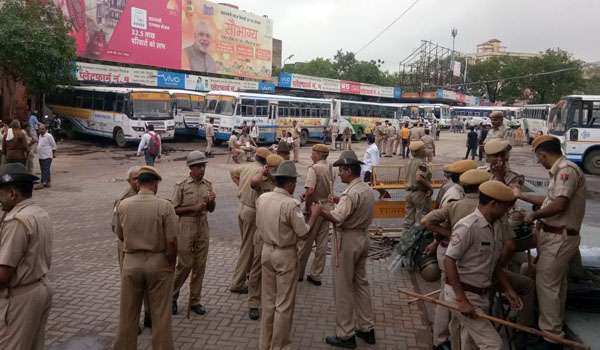 Jaipur: The district administration imposed a curfew in Karauli town of Rajasthan after two groups from different communities clashed and indulged in arson and stone-pelting on Saturday. Some people from a community were taking out a procession on the first day of Navratri. Some people from the other community pelted stones at them, causing a serious law and order situation.

Following clashes between the groups, some miscreants set at least six shops and two bikes on fire. Senior administration and police officers were camping in the town till the reports last came in. They said that the situation was under control.

The religious procession was passing through Hatwara market when the incident took place. Some people hurled stones at the rally. The people participating in the rally retaliated. Some people sustained minor injuries in the incident.

There was chaos in the market due to stone pelting and traders closed their shops. Some people set fire to more than six shops and two bikes. The shops were gutted in the fire. Policemen in large numbers reached the spot after getting the information about the disturbance. A police force was deployed in communally sensitive areas in the town. Senior police officers tried to placate people from both communities but to no avail. Later, the district magistrate clamped curfew in the town.